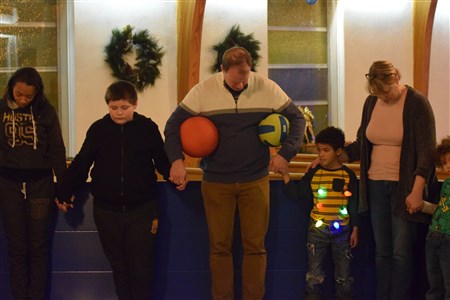 Christmas came a couple of weeks early at Grace Kids: A Church for Children, when the south Louisville church was gifted with a custom-made gaga pit in the sanctuary for its active and high-spirited youthful congregation.

Say what? A gaga pit? In the sanctuary?

We reached out to Santa Claus to get to the bottom of this Christmas miracle. As you might expect, he was pretty busy getting ready for Christmas Eve, but he did give us a few minutes for a quick phone interview.

“Ho, ho, ho, so good to hear from my friends in Kentucky!” Claus said. “Merry Christmas to all of you good United Methodists across the Commonwealth!”

Asked how it was that Grace Kids came by their gift, Claus said he couldn’t go into a lot of detail – but he did stress that the kids there have “been especially good this year” – a statement that was confirmed by Grace’s pastor, Rev. Corey Nelson.

Again pressed on who gave Claus the idea to bring them the gaga pit, the Jolly Old Elf said he had been sworn to secrecy. However, we have been doing a little investigative reporting and have uncovered a few other details.

It seems that gaga ball, which originated in Israel and is becoming popular in this country, is also quite popular at Grace Kids. In fact, Pastor Corey and his team had helped the kids set up a makeshift gaga pit in the back of the sanctuary using folding tables.

Once Claus was alerted to the situation, he said that he and his elves would try to give them something a little nicer. But makeshift gaga pits are a bit out of their comfort zone, so they reached out to Brian McBurney, a member of Crestwood UMC. McBurney is maintenance manager at Dant Clayton Corp., a Louisville company that specializes in building and installing stadium bleachers.

McBurney had used scrap pieces of metal to build a gaga pit for the youth at Crestwood, and he was contracted by Claus and his team of elves to do the same for Grace.

He purchased the material at cost, worked with Pastor Corey and others to match the colors to Grace’s bright color scheme, and then he and a team from Crestwood – Tom Carter, Clay Carter, and Justin Hopp – slipped into the church on Thursday, Dec. 12, to assemble it.

So everything was set so the kids would be surprised when they came in the next day for their regular Friday evening fellowship.

Friday the 13th was a chilly, rainy evening, but they still had close to four dozen at church, ranging in age from toddler to high school.

They started with pizza, fruit and drinks in the fellowship hall, and Pastor Corey and his team (mostly) managed to keep the kids out of the sanctuary until the formal unveiling, which was attended by Bishop Leonard Fairley and his wife, Dawn, along with several staff members from the Kentucky Annual Conference.

After dinner, Pastor Corey and his team brought the kids up to the sanctuary. One by one they filed in, filling the large room with “Whoas!” “Look at that!’ and other surprised and delighted comments.

“Is that a swimming pool?” one boy asked, drawing smiles and chuckles from the adults nearly – and maybe a few of the older kids, as well.

Bishop Fairley got into the gaga pit and invited the kids to join him, and he dedicated it as the children waited patiently for him to finish so they could try it out. And soon the room was alive with laughter and cheering as they enjoyed their first spirited match.

As for Pastor Corey’s reaction to the Christmas season surprise? “I am just blown away.”

We’re pretty sure that Santa, busy as he is right now, is smiling in approval.

View more pictures from the unveiling of the gaga pit