In solidarity with Ukraine 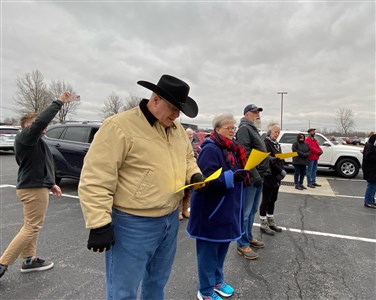 NICHOLASVILLE, Kentucky – Between 400 and 500 people – many of them United Methodists from the Lexington area – gathered outside the Ukrainian Pentecostal Church in Nicholasville on Friday, Feb. 25th, in a show of solidarity with the besieged Eastern European country.

The vigil was the brainchild of Beverly Johnson Miller, who had seen a poignant image from Ukraine that haunted her, so she rallied her Sunday School class at St. Luke UMC in Lexington to organize it. Participants prayed in song, responsively, and spontaneously gathered in small groups outside the Ukrainian church. The temperature was in the low 30s and snow flurries fell on the participants.

Members of the Ukrainian church also gathered, and a member of that congregation sang a moving rendition of “Blessed Assurance” as the crowd joined in.

Several Lexington news stations were present to capture the wonderful spirit of support for the Ukrainian people and church.

After a months-long troop buildup along the border between Russia and Ukraine, Russian President Vladimir Putin this week ordered his troops to launch a full-scale invasion of its much smaller neighbor. The provocative act has rocked the world and has prompted outpourings of support, solidarity, and prayers on behalf of the Ukrainian people.
Story and photos courtesy of Rev. Jill Ruhl, The Source/Southern Hills UMC