In wake of unrest, Conference planning series of events this summer 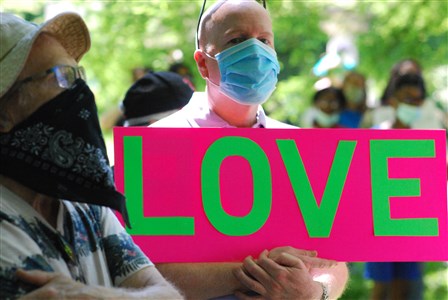 Representatives of the Kentucky Annual Conference’s Religion & Race and SBC21 teams are busy putting together a series of events to take place through September -- and beyond – in response to the civil unrest following the deaths of African Americans at the hands of police.

Protests, which occasionally turned violent, broke out in Louisville and other cities across the country after the death in Minneapolis of George Floyd. Emotions were already raw in Louisville following the death of Breonna Taylor, an emergency medical technician who was shot to death by police in March during a botched raid on her apartment.

“I am so excited … and grateful that the church is having this conversation,” said Rev. Dr. Kathy Ogletree Goodwin, who chairs the SBC21 team. (SBC21 is short for Strengthening the Black Church for the 21st Century)

She is working with Jonna Carter, the business administrator at Wesley UMC in Lexington and chair of the Religion & Race team; Rev. Dr. Leanne Hadley, an associate pastor at Christ Church United Methodist in Louisville; and Cathy Bruce, the Associate Director of Connectional Ministries for Communication. All four women discussed the plans during a Zoom interview on June 9.

The dialogue, which is titled “Do You See What I See? How Race Relations Cause Us to See Things Differently,” came about after Bishop Leonard Fairley reached out to the leaders to get their suggestions on what the Conference could do to help mitigate the current crisis.

A series of events are planned this summer: Goodwin, who is pastor at Asbury UMC in Owensboro, said she has been with the Kentucky Conference for nearly 25 years and believes this conversation is long overdue. Many strong African American leaders have been forced to move elsewhere because of limited opportunities in Kentucky, added Goodwin, who is moving July 1 to Fourth Avenue and Crescent Hill churches.

She said that when Bishop Fairley reached out to SBC21 and Religion & Race, one of the things discussed was practical steps, like prayer. It quickly became apparent that prayer alone wouldn’t be sufficient – a great place to start, but only the first step. “The first thing prayer needs to change is the person praying,” Goodwin said.

We can’t say as a Conference that “we’re good” after the clergy exchange in September, she stressed.

It also will require active engagement from people across the Conference, she added. People of all races must overcome their hesitancy to speak out, and it’s imperative that the church be a moral leader during these challenging times. But she expressed optimism: “We’re going to be better because I’m praying we’ll be better.”

Hadley is enthusiastic about her role in helping to get children involved in the discussion. “We don’t want to assume that this is just a movement of adults.” Plus, she added, children have an influence on their parents.

She said she has talked with children about the developments of the past few weeks, and “they can’t even wrap their little heads around this.” Some adults prefer to think of violence and unrest as just an adult issue, but “children are not as fragile as we think they are,” Hadley said.

Carter said success largely hinges on people getting to know other people on a deeper level. Until we spend time together and engage in honest conversation, we don’t fully understand other perspectives. “You have to want to see things differently, and that’s where the hard work comes for us,” she said.

Hadley believes this could prove a “resurrection moment” for United Methodists in Kentucky. Everyone wants to avoid pain, but for healing to take place, we need to go through the pain first. The church is uniquely positioned to be a moral leader in the midst of crisis. “I think that’s what the church could bring that the secular world doesn’t have.”

The death May 25 of George Floyd was a horrific thing, Goodwin summarized, but “I’m glad we’re having the conversation and I’m glad we’ve been led to this place.”

Do you see what I see? Litany and prayer
Prayers for the Healing of a Nation
Devotion written in response to George Floyd’s murder