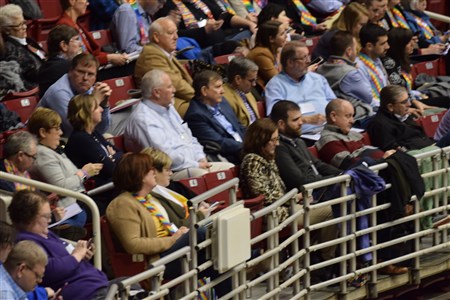 ST. LOUIS – For many, the drive to St. Louis is because it is time for a summer’s getaway. Perhaps to take part in a weekend vacation to visit the Gateway Arch, the St. Louis Zoo, or catch a St. Louis Cardinals’ baseball game at Busch Stadium.

Not many would consider a trip to St. Louis at the end of  February a destination experience. However, for many clergy and laity of the Kentucky Annual Conference there was nowhere  else they could imagine being.

Throughout the recently concluded special General Conference, the stadium seats at the Dome of the America’s Center that once gave fans a place to watch the St. Louis Rams gave people a chance to watch for themselves this momentous occasion.

They were there to watch, in person, on Tuesday as the General Conference approved an amended version of the Traditional Plan. Throughout the called session, many reflected on why they made the short trip from Kentucky to St. Louis.

Among those observing were  Lesley Williams and her mom, Leigh Ray. The mother-daughter pair decided to attend General Conference at different points. Ray decided to use her gifts of organization to serve as a page, while Williams only made the decision to attend on Saturday.

“It was fortunate that I knew my mother would be here as a page,” Williams said. “I knew there would be a place for me to stay.”

Ray said she wanted to be at General Conference because the conversation about human sexuality in the church was important for her. She also said she wanted to ensure that her grandson, Williams’ son Bennett, would have a church to attend.

“It is important for me that it becomes a united church,” Ray said. “I want her to have a good strong church. I want him to have one, too.”

Williams wants that for her son, as well as to continue being part of a United Methodist Church that values love.

Part of that includes being part of a United Methodist Church community that seeks to be inclusive of all people.

“I am blessed to worship at a local church that is inclusive and loving of all people who come through that door,” Williams said of her church, Christ Church United Methodist in Louisville. “Even with the current rules in the Book of Discipline that we have, I am going to know that my local church is still going to love and be inclusive as they were yesterday and they will be tomorrow, too.”

Several pastors came wanting to have a firsthand experience of what to share with their community. This included pastors from nearly all corners of the Kentucky Annual Conference and from various ministry settings. 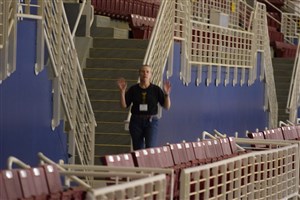 Among those was Rev. Sylvia Baker-Noren, the campus pastor of the Kentucky State Wesley Foundation. Throughout General Conference, Baker-Noren would walk the upper seating area. She did so as a way to pray over the proceedings, saying she felt the need to do so throughout the sessions.

Others wanted to see for themselves what they often only saw on the live stream. This included Rev. Shannon Boaz of Scottsville UMC. She said the short drive, around four hours, helped to make the decision to be in St. Louis.

She came wanting to see Methodists continue to be a people known for having a big table where everyone was welcome.

“If you want to bring your chair up, we want you to be there,” Boaz said. “That has been my understanding of The United Methodist Church. I came, hopefully, to see that continue to go forward.”

Rev. Kaury Edwards, of Wesleyan Heights UMC in Owensboro, wanted to be a representative presence of younger clergy. The presence of youth and young adults became a common talking point throughout the proceedings, especially in terms of wanting to make sure there was a church that was welcoming for millennials.

While Boaz and Edwards wanted to report back to their local church, Rev. Mike Voigts had a different context in mind when he decided to come to General Conference. Voigts teaches Methodist polity as Asbury Theological Seminary and wanted to be there to help his students make sense of what occurred.

“They’re nervous,” Voigts said about his students. “They have no clue how this process works, for one, because they are just studying it out of the Book of Discipline. I am just trying to calm them down. God is bigger than this.”

His experiences provided him a unique take on how the process of General Conference is seen.

All who came to General Conference, though, came with the same overall guiding principle. They love the church and want to continue being the church God calls The United Methodist Church to be.

“We need to continue to march in the light of God,” Edwards said.

Rev. Shannon Blosser is the pastor of Ogden Memorial United Methodist Church in Princeton. He serves on the Kentucky Annual Conference’s Communications Team.