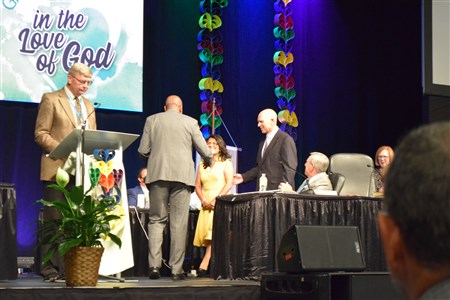 OWENSBORO, Kentucky – The 2022 Annual Conference – the first in-person gathering since 2019 because of the COVID-19 pandemic -- wrapped up Wednesday, June 8, with a recognition of 20 retiring clergy, and business that included approval of the 2023 budget.

“I think it went well because we allowed the presence of God’s spirit to be with us and we extended to one other grace,” Bishop Leonard Fairley said in a brief interview after Annual Conference concluded.

Rev. Tami Coleman, who is concluding three years as Conference Secretary, said: “There was a sweet spirit among us as we celebrated ministries, worshiped the Lord through ordination, remembered those who are now in the great cloud of witnesses, recognized our retirees, and as we attended to the business of Annual Conference.”

Motion to call for GC session

In a piece of business that came before the floor Wednesday morning, Annual Conference members narrowly rejected a motion calling on the Kentucky Conference to petition the Council of Bishops to call a special session of General Conference this year to consider a denominational-separation agreement. The final vote, taken electronically, was rejected 309-307.

Larry Wells, a member of Christ UMC in Bowling Green, presented the motion on behalf of himself: “I move the Kentucky Annual Conference petition the Council of Bishops to call a special session of General Conference, however convened, to meet no later than October 31, 2022, specifically, and only, to consider the Protocol of Reconciliation & Grace Through Separation, and to consider extending the time limit in book of Discipline Paragraph 2553 beyond December 31, 2023.”

He said General Conference has been “rendered mute” during a crucial time in the life of the church. He said he believes it was an error to delay General Conference until 2024 before the Protocol or any other separation agreement can be considered.

Tess Welch, a member of the youth and young adult delegation to Conference, spoke against the motion, in part saying that some of the organizers have withdrawn their support. (That news was announced just Tuesday) Wells then spoke again in favor of his motion, before the vote was taken.

Rev. Dr. John Kalz, co-Lead Pastor at Madisonville, interviewed Pastor Adrian Myslinski, of Tarnow UMC in Poland, via Facebook Live. His church is just 100 miles from Ukraine and has been working with many others to help refugees fleeing the Russian invasion of that country.

“It’s a great privilege for us to be a witness to Jesus of them, to be the hands of Jesus, not only the words,” he said.

After the short interview, Kalz prayed for them, urging people to stretch their hands toward Poland. The members gave Pastor Adrian a standing ovation.

Kim Keller, Council of Finance and Administration Chair, and Rev, David Garvin, Conference Treasurer, presented the proposed $6.4 million budget and 10% apportionment rate for second reading and a final vote. The Annual Conference approved the budget by a show of hands.

Garvin also shared an update with the $30 million Boy Scouts of America bankruptcy settlement case. He said that the United Methodists will be reviewing Safe Sanctuary policies. He also said that a new charter agreement is expected later this month.

Keller also shared that CFA has shared 33 grants over the past few years. The grants are still available at the Conference website, www.kyumc.org. Also, Our Mission Covenant funds can now be transmitted electronically, and benefits bills also. For more information, contact Conference Controller Heather DuVall at hduvall@kyumc.org.

Keller also said the Conference has collected $1.1 million toward tornado-relief efforts from around the country.

View our photo album from Wednesday