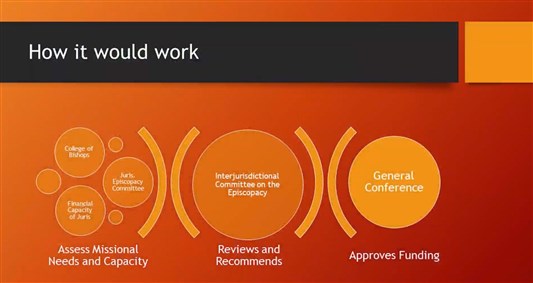 Kentucky delegates to General Conference and Jurisdictional Conference were part of a meeting held via Zoom on Saturday, Feb. 13, to update U.S. delegates on financial-related issues, including the fund that pays for bishops and their offices.

The financial challenges and subsequent conversations have been happening for a while, but the COVID-19 pandemic has “created dynamics that we had not anticipated,” said Rev. Tami Coleman, a GC delegate and part of the three-person Kentucky executive team. Saturday’s meeting was called “A Report to Jurisdictional Delegates to General Conference.”

There are five regional jurisdictions in the U.S.; Kentucky and 13 other conferences (plus Red Bird Missionary Conference) make up the Southeastern Jurisdiction. About 400 delegates from the SEJ were among those around the country who took part in Saturday’s Zoom session.

No decisions were made, Coleman said Monday during a Zoom interview. The meeting was to update delegates on some of the financial uncertainties. Delegates heard reports on the status of the Episcopal Fund among others, then each jurisdiction met afterward for a time of discussion in small groups.

During Saturday’s meeting of the SEJ delegation, Kentucky Bishop Leonard Fairley offered an opening prayer and introduced the Proposal for Action team, which was formed in January at the SEJ’s Leadership Summit to spearhead action on some of the looming financial matters. Fairley is currently serving as president of the SEJ College of Bishops.

If action isn’t taken and if the receiving of General Conference funds continues to decline, the Episcopal Fund could dramatically decrease before the end of the quadrennium in 2024, Coleman said. Bishops and their offices are not currently funded directly from annual conferences, although conferences contribute apportionments to the fund, which pays bishops’ salaries, travel expenses and benefits.

The SEJ delegates met earlier in January to hear the information regarding the Episcopal Fund and to begin considering options.

Coleman said the issue boils down to sustainability of the Episcopal Fund.  One proposal could be to ask annual conferences to pick up some of the expenses of their bishops, such as their housing costs, she said. Another idea they are looking at is asking annual conferences to pick up funding of episcopal support staff.
Coleman said delegates have control over some of the upcoming decisions, such as whether to allow bishops to retire, but other aspects fall under the purview of the UMC’s general boards and agencies such as the General Council on Finance and Administration.

Coleman said there was no conversation about the proposed denominational split, called the Protocol of Reconciliation and Grace through Separation. This is legislation, which cannot be considered until GC meets.
The General Conference Commission is scheduled to meet this weekend. Kentucky’s delegation is scheduled to meet on Thursday, Feb. 25.

Much remains unclear and undecided. Coleman said one point made Saturday is the unprecedented nature of having to consider financial-sustainability issues this way. She also said that despite the challenges, it’s an honor and privilege to serve as a delegate.

“I have a great appreciation for the leadership who are seeking to involve the delegates’ input and in keeping us informed at this critical juncture in the church’s future,” Coleman said.