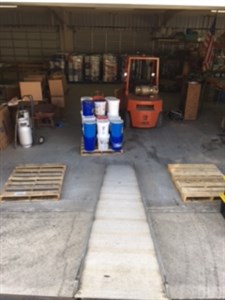 When disaster knocks, the Kentucky Annual Conference of the United Methodist Church stands ready to answer.

In conjunction with Bishop Leonard Fairley’s mission trip to the Lumberton, North Carolina, area in late March to help the region flooded by Hurricane Matthew, the conference sent a truckload of relief supplies to the state. David Pratt, the disaster response coordinator for the Bluegrass District, and Kevin Burney, the conference’s director of ministerial service, delivered the supplies.

The rented Penske moving truck contained “a little bit of everything” to help the stricken residents, Mr. Pratt said: “It was heartwarming to see the people’s response to the donations,” Mr. Pratt, a member of Centenary United Methodist Church in Shelbyville, said in a phone interview after returning home.

Jim Morse, the Kentucky Conference’s disaster response coordinator, and others started spreading the word across the state that donations would be collected. Some of the conference’s nine districts already had relief supplies on hand; others sought donations.

Then in December, Bishop Fairley met with the various disaster response coordinators, and plans for the delivery began to take shape.

On Wednesday, March 22, Mr. Pratt and other volunteers made a day trip to western Kentucky to pick up items collected by the districts in that part of the state. Then on Thursday the 23rd, they loaded the truck with supplies from elsewhere that had been taken to Shelbyville.

Mr. Pratt and Mr. Burney then left for North Carolina on Friday the 24th, arriving late in the day at the Western North Carolina Annual Conference’s Mission Response Center in Terrell, which is near Charlotte. They unloaded the items on Saturday the 25th, then drove another three or so hours to join the mission team in Lumberton.

Mr. Pratt said the extent of the damage from Matthew was sobering. “It was quite an eye-opener for all of us.” But the people of North Carolina were upbeat and very grateful, he added.

He said the relief-convoy project was a conference-wide effort and included churches both large and small.

Kentucky United Methodists have assisted during other recent large-scale disasters. In 2012, the conference sent a number of cleaning buckets in the aftermath of Hurricane Sandy, Mr. Pratt said, but that mission was less involved from a delivery aspect. A trucking company volunteered to transport the buckets to the stricken region of the Northeast, he said.