Living her dream job – and calling 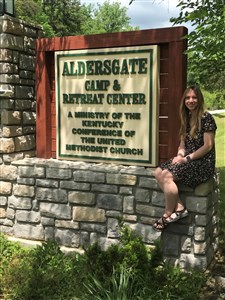 RAVENNA, Kentucky – More than two months after beginning as Director of Operations for Aldersgate Camp & Retreat Center, the personal touches in Haley Andes’s office remain very much a work in progress.

Pictures of her summers at Aldersgate – both as a camper and as a staff member – hang on one wall, and signed paper plates from her years at camp eventually will also hang in the office. She just hasn’t had time to get to everything yet, with staff to hire and grounds to prepare for the busy summer camp season.

Andes, 27, who became director when Dave Cohn left to become director of a camp in North Carolina, is reveling in her dream job.

“Haley was the most qualified candidate, but there were a few things that really screamed we should hire her,” said Warren Hopper, Executive Director of Camp & Retreat Ministries for the Kentucky Annual Conference. “Her spiritual focus and maturity were evident. She trusts in God and believes in the way God works through Camp & Retreat Ministry! In fact, she's a product of what God does with a life through camp.”

Knowing how camp functions and its role in building campers’ self-esteem, along with her education – she has a bachelor’s degree in Parks and Recreation Administration and a master’s degree in Business Administration – were also key factors, Hopper said.

Andes is also both the Conference’s youngest and its first female camp director – though Hopper emphasized that it was her qualifications that made her a natural fit for the job. “Since her hiring, it's her commitment and dedication to this ministry that have most impressed me,” he said.

For Andes’s part, her first two months have been a whirlwind, hiring Genia McKinney as the camp’s year-round Hospitality Director, as well as working with Hopper and others to hire 11 summer camp staff. And doing more than a little problem-solving.

On a recent pleasant sunny Monday, Andes was preparing to host five of the summer staff at her Georgetown home for most of the rest of the week so they could use a friend’s backyard pool for lifeguard training. (The Aldersgate pool was undergoing repairs that had ended up being much more involved than they had initially thought, and it wasn’t close to being usable.)

Also, during the interview for this story, she paused to take a phone call about the logistics of getting one of her summer staff members from her home in Gary, Indiana – a five-hour drive away – down to Kentucky. (The staff member ended up getting back in time for training.)

Problem-solving and logistics challenges at camp are nothing new for Andes. She got an early taste of it in 2015 as Summer Program Director, her third year on camp staff.
“That was a crazy summer!” she said.

It’s not unusual for the small creek that runs through camp to flood during heavy storms, but this was particularly severe. Lightning struck the Cedar House, catching it on fire. The power was out. Andes was with staff who had one group of campers up the hill at the lodge (another group was sheltering on the other side of the creek), and dinnertime was approaching.

She gathered the other staff members together, and they prayed. Andes – only 20 at the time – told herself she needed to stay calm and set a good example.

They ended up serving the campers pizzas cooked in the gas ovens. Once the water went down and they could safely cross to the other side of camp, they fed the other group.

She recalls that the campers were largely unaware of all the excitement, perhaps even that the fire department had responded to the fire at Cedar House– battling downed trees and floodwaters to get to camp.

She also recalls that the next day, Cohn said the staff needed to call the parents of the campers to let them know what had happened. They were understanding – but the interaction proved to be a personal growth experience for Andes.

A typical day for Andes these days has her making the 70-minute drive from her home in Georgetown to Aldersgate, which is situated in the picturesque Appalachian foothills southeast of Lexington. “I promise, I drive the speed limit,” she said, laughing.

She often listens to audiobooks on personal and professional development while driving to and from camp. At the time of this interview in mid-May, she was beginning her sixth book since starting the job in late March.

She has three different routes she can take during her commute – though if her son Bryan, 5, is with her, they generally take the route that goes through Irvine, which has an ice cream shop.
Before final preparations for summer camp, she had been splitting her workdays between home in Georgetown and camp. A lot of her administrative work is easier done at home since cell phone service at camp is iffy at best. She even changed her phone plan to a carrier that works better in the hills, but calling and texting can still be a challenge.

Most of the year, Andes plans to continue living in Georgetown, where her parents – her “support group” for her young son – also live. Bryan, who will turn 6 in July,  recently finished preschool and will be spending the summer at Aldersgate. “He’s very excited,” Andes said.

Andes is very appreciative of the year-round staff at Aldersgate. Besides recent hire McKinney – who Andes said “has a heart for hospitality’’ and will be in charge of the kitchen during camp -- she said that Administrative Assistant Nancy Bidwell and Maintenance Director Dwight Rogers have been extremely supportive and helpful.

Andes also spoke highly of Hopper, who besides his role in charge of C&R Ministries is the director of the Conference’s other camp, Loucon Camp & Retreat Center.

“He’s really good about staying in close touch” and assist her as she learns her new role, she said. He’s always willing to help and is free with his advice and suggestions. She doesn’t have a lot of background with maintenance work, “but I’m learning a lot about it.”

She’s equally effusive in her praise of the numerous volunteers who make camp happen.

“They do it for the love of camp,” Andes said. “They know how they’ve been impacted by camp, and they want to give back and help. They’re very willing to come out and help when they can.”
Bidwell, who has been on staff at Aldersgate for 13 years, has great memories of Andes from the summer of 2015. “I knew she would be great at this job, and she has been.”

Cohn, who was at Aldersgate for eight years, also has been more than willing to help when Andes has reached out to him with a question about the ice machine or how to use the camp grill. (He is well-known for his passion for grilling.)

The Aldersgate summer staff is also excited. “We love our girl-boss Haley!” said Kayla Koerner, a 20-year-old Lindsey Wilson College student who this year will serve as Summer Program Director. Koerner said the staff all loves her and feels very supported.

Andes sees her strengths as programming, working with people, and spirituality. She said she has a strong desire to see people grow and knows how to challenge them – nudging them into their “yellow zone,” as she calls it.

“The staff gives a lot of themselves over the summer,” Andes said. “They need someone who is pouring into them, as well. And that’s something that really excites me about this role.”

Andes gave her life to Christ at Aldersgate the summer before her sixth-grade year. She remembers going home and telling her parents and soon after was baptized in an animal trough at her church, which lacked a true baptismal. Then as a freshman at Scott County High School, she felt a calling from God that eventually evolved into camping ministry.

And now she is living into that calling, although she said she’s not sure it has fully settled in just yet.

“I think this is where I’ve always pictured for God to want me to be, and to be able to do that at my age, really is kind of amazing. It’s overwhelming, but in a good way, if that makes sense. … To be in this role and able to step into God's calling on my life is just amazing.”

SEE THE VIDEOA video introducing Haley Andes that was shown to the Kentucky Annual Conference meeting in Owensboro on June 8 can be seen on the Conference YouTube channel by the end of the day.