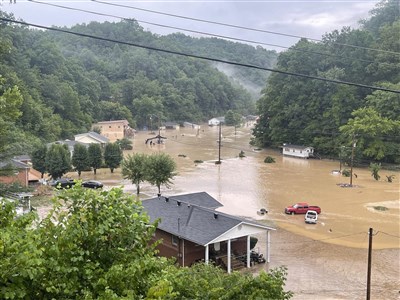 Volunteer work crews to begin long-term recovery efforts in flood-ravaged Eastern Kentucky are starting to form and will begin work in the region in early spring 2023, according to Rev. Jim Savage, the Regional Response Coordinator for Eastern Kentucky.

Savage, recently appointed by Bishop Leonard Fairley to serve in the role, said it is critical for volunteer groups form to assist families during rebuilding efforts. One of his main responsibilities will be to schedule the work crews in coordination with Rev. Gary Baker, the United Methodist Volunteers in Mission (UNVIM) Coordinator for the Kentucky Annual Conference. (Savage already had been serving as Disaster Response Coordinator for the Central Appalachian Missionary Conference, formerly Red Bird.)

A Long Term Recovery Group (LTRG) has been formed in the eight-county region and as part of its early work has secured six host site churches to house teams for deployment starting in the spring.

The flooding on the night of July 28, 2022, is some of the worst that longtime residents can recall. Communities throughout Eastern Kentucky were awakened in the middle of the night when 11 inches of rain fell within two hours. Hundreds of people lost their homes, and 40 people lost their lives. Entire communities were devastated. Thousands found themselves in damaged homes or homeless, having lost everything.

Conference staff, local laity, and pastors were on the ground helping people on day one but quickly realized that with the recent tornado destruction in Western Kentucky and now flooding in Eastern Kentucky, there was much more to be done than they could fathom. Savage and others have been working with UMCOR, the United Methodist Committee on Relief, to bring Assessment Teams and Early Response Teams (ERTs) to the affected area.

The LTRG will oversee the next phase. If you, your church, or your organization would like to help the people in Eastern Kentucky, contact Savage at (270) 993-8908.