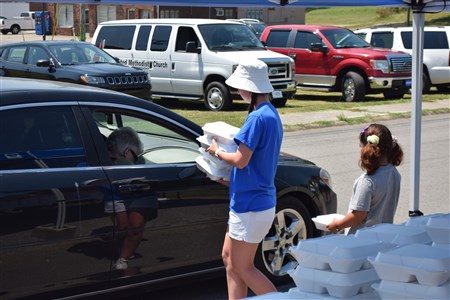 DAWSON SPRINGS, Kentucky – The line of vehicles was already forming at 10:50 a.m. on June 30th – 10 minutes before two dozen staff and volunteers from Madisonville First UMC were scheduled to start handing out box lunches to volunteer work crews.

By 12:10 p.m., they had handed out nearly 400 meals that included chicken and beans prepared by the church, said Rev. Dr. Loletuth and Rev. Dr. John Kalz, co-Lead Pastors.

The grateful work crews were there to help the southwestern Kentucky town of about 2,500 recover from a deadly tornado Dec. 10 that left 17 people dead and leveled much of the town. The tornado plowed right through the heart of the town at 10:30 p.m., destroying nearly 600 homes and damaging 1,000 others. The official death toll across Kentucky was at least 80.

Madisonville First and other area United Methodist churches have been active almost from day one in assisting in the relief and recovery efforts in Dawson Springs.

“It feels like an opportunity to help people … and just put a smile on their faces,” said 12-year-old Adriana Reyes, one of those handing out lunches to volunteer crews on this hot, humid day as cars, pickups and other vehicles slowly cruised past the twin tent awnings set up along West Keigan Street outside the Dawson Springs Community Center. Adriana is the daughter of Rev. Yasmel Reyes, Associate Pastor at Madisonville First.

Adriana’s 7-year-old cousin, Jazmin Batista, was also on hand and was enjoying herself. “It’s great to be helping people,” she said.

Among those who came by to grab lunches was Kevin McPhee, driving a pickup with other volunteers inside. They were part of a 19-person team from Fields UMC and Avon UMC, on the west side of Cleveland. The two churches combined forces and spent a week in Dawson Springs.

As of late June, about 50 volunteer teams had been there, with another 50 scheduled later in the summer, said Kim Gilliam, Madisonville First’s Disaster Recovery Coordinator – a temporary position that the Kalzes and the church created in the aftermath of the tornadoes, which hit not only Dawson Springs, but other areas of Kentucky stretching from Mayfield to Bowling Green.

Dawson Springs and Madisonville are both in Hopkins County, and the recovery work is proceeding as part of the county’s Long Term Recovery Group, or LTRG. (The Kentucky Annual Conference is also in the early stages of planning a mission trip Oct. 2-7; registration information and other details will soon be on the Conference website, www.kyumc.org.)

Gilliam was hired for Madisonville First’s temporary position in mid-January to serve as the church liaison with disaster recovery teams and others assisting in the cleanup and rebuilding process. She is a Hopkins County native and has been able to plug into the community from day one.

Gilliam, an attorney, had been preparing to run for Hopkins County District Court judge. When the tornado hit and Madisonville First created the temporary position, she knew where her heart was and felt as if God were opening a door for her.

A big part of her job is to help coordinate the volunteer teams and to find housing for them. The groups initially stayed at the local 4-H camp but needed to stay elsewhere starting in February, so area churches have been housing them. The largest groups stay at Madisonville First; other United Methodist churches involved in housing are Dawson Springs (once it had been repaired), Hanson, Ogden Memorial, Eddyville, and two non-UMC churches, Hanson Baptist and Gilliam’s church, Christview  Community Church.

At Madisonville, they used some of the relief money that has come in to purchase cots for volunteer work crews, which generally stay anywhere from a few days to a week.

What the work teams do depends on their skill level. A lot of the summer groups are youths who lack professional training in various trades. The unskilled teams are assigned debris pickup at lots, Gilliam said – known as “spick and spanning” – before more skilled crews arrive to repair or rebuild.

Gilliam said it is miraculous that so much of the debris has been removed after less than seven months – important not just for long-term recovery, but to provide a sense of normalcy for the residents. Most of the debris were hauled away and deposited in abandoned strip mines, she said.

On this day, the church was serving meals to work crews. It was an especially busy week for crews, just ahead of the Fourth of July holiday. Feeding the crews has been a challenge; at one point, Gilliam said, a team from Louisiana came up for five days and did nothing but serve Cajun meals to volunteers. They’ve also had food trucks come in and help, she said.
(Hanson UMC also is scheduled to serve about 350 meals to volunteers on Thursday, July 14. Rev. Tami Coleman said they have about 20 people planning to take part – including Betty Blue, 91, who remains active in the church.)

Kathy Nichols, of Dawson Springs, is on the board of the Community Center and has been a key contact for Gilliam and Madisonville First. As the church team took down the awnings, Nichols commented on how different the town’s park looks, with so many mature trees wiped out. Next to the loss of life, it’s what strikes her most about the aftermath of the storm, even months later with the recovery well underway.

“We couldn’t do it without all these other people,” she said. “It’s a path we’ve never walked, and I hope we never walk it again.”

Earlier, Communications Teams from Madisonville First and the Kentucky Conference had stopped about a block away to interview Tonya Todd at her new house – the former Dawson Springs UMC parsonage. Todd, 64, and her husband, Mark, and elderly mother survived the tornado in their previous home – but were trapped in the debris for an hour and a half.

Todd, who suffers from lupus, was sitting outside her new home sipping water. The small church and parsonage had sustained wind damage, but the church building has since been repaired, and just some finishing touches – siding and roofing – on the garage will complete the repairs on the former parsonage – the Todds’ home now.

Todd, a member of the Dawson Springs church, related a harrowing story of survival when the December sky turned deadly.

The night of the storm, they were in their former home about half a mile up East Keigan Street. She said she had been “tied to the TV for a week,” since the forecast for potentially dangerous storms had been predicted several days ahead. All that day, she saw that the dangerous weather was approaching.

The house had a small basement, but they didn’t go there partly for fear of snakes and partly because of the lack of mobility of her elderly mother. Minutes before the tornado hit, they took shelter in the interior part of the house, and Todd called her son.

She started hearing things go “splat, splat, splat” against the windows and side of the house. They found out later it wasn’t rain or hail – it was insulation and other debris from houses that had already been hit by the monster EF-4 twister.

Then house started “shaking like an earthquake,” Todd said. “I said, ‘Oh my God, it’s here!’“ Todd grabbed hold of her mother, injuring her wrist in the process.  She was praying as loudly as she could. “Mark said he’s never heard me call on God like I was.”

The tornado “sounded like a monster,” she said. “It was like a nightmare. It seemed to last forever,” even though it probably was only 10-15 seconds.

When the winds finally eased, they opened the doors from the room – and found they were trapped, unable to get out either the front or the back door. The rain was pouring in, and they could smell natural gas from broken pipes.

They screamed for help and could hear neighbors doing the same. The rescue squad got there and cut them out about an hour and a half later. They had to twist and turn to avoid trees and other storm debris in the street.

It was “total chaos, total destruction. It was bad,” Todd said.

They ended up staying at her son’s house for three and a half months. Her mother went to stay with Todd’s brother, who lives nearby and whose home was not damaged.

When the Todds found out that the parsonage at their church was for sale, they jumped at the chance, using the insurance money from their lost home.  They even transplanted some flowers from the old house to the small backyard at the new place.

Also out back is a small shed that the Amish built through a program that the Fuller Center for Housing set up. About 200 similar sheds sit on property around town. Families use them to store belongings rescued from the rubble of their former homes.

Todd said she lost seven good friends in the storm. Two of those killed were elderly sisters who were members of the church, which Gilliam says has only about 20 members.

But amid lingering sorrow, the Todds are grateful for their new home: “That right there was God’s work,” she said. They have shared their home with less fortunate neighbors, as well, letting them use their house to shower and do laundry.

“I am so blessed,” Todd said. “I wake up every morning and thank God for what I’ve got.”

Later, Gilliam showed the Conference Communications Team around the disaster zone – block after block with the debris mostly hauled off, but the lots empty of houses and mobile homes.
Gilliam said the rebuilding has been a slow process, partly because of the cost and scarcity of materials, and they are happily accepting and seeking donated materials. But the rebuilding is happening. Habitat for Humanity will use a grant to build between 12 and 20 homes later this summer or early fall, she said. Town officials are also working to help with the rebuilding process, Gilliam said.

Outside one house, two women were sitting on the porch; they were part of a work crew from North Broadway UMC in Columbus, Ohio, and were staying in Hanson.

Outside a new mobile home a few blocks away, Joe Workman was using a hole digger in preparation to build a porch; once the porch was done, the elderly lady who lived there would be able to move back, he said. Workman is the construction manager for the Hopkins County LTRG and a member of Dunn Missionary Baptist Church in Dawson Springs.

He said the woman had been in the old trailer when it blew away and was hospitalized until February.

“It’s remarkable, the outpouring of love from all over the country. It’s amazing,” he said.

Rev. Micah Holland, Pastor of Avon UMC, said that during their week there, the combined Avon and Field teams had applied siding, worked on a bathroom, and had built two porches. He has been on about half a dozen similar mission trips, he said.

They had heard the tragic stories about people losing their homes and needing to start over and wanted to help. Cleveland is about a seven-hour drive from Dawson Springs.

“I think it’s what Jesus tells us to do, to be a blessing in the world,” Holland said. He said it’s been a glory sighting to see other people living out that message, both United Methodists and other denominations.

“The church is alive and making a difference,” he said. “That for me is incredibly exciting.”

View video on the progress being made in Dawson Springs