Methodist Mountain Mission in the eye of the storm 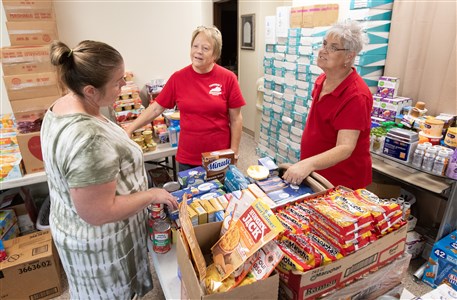 JACKSON, Ky. – Debbie Holcomb and Rose Calhoun were cheerfully sorting through tons of food donations that were coming in by truckloads and from individuals to the United Methodist Mountain Mission for the survivors of the worst flood in the history of Eastern Kentucky.
The two United Methodist women were offering just as many hugs as bags of food.

“We are seeing pitiful, pitiful people. People who sat for hours before they were rescued from dark, wet places. They were alone and they could hear babies crying. Sometimes they just need to be held,” said Holcomb.

Belinda Gross came in looking for food for her family of four. “It destroyed everything I had,” she said. “I had a brand new washer and dryer, refrigerator. It is the first time I ever got water in my house.”

Tony Struzziery was bringing in a truckload of donations from Roanoke, Virginia.

“My heart told me to come. I’m a contractor and I’ll be back to help people stop mold in their homes before it gets a grip.” Andy Mitchell, communications director for the mission, said help is coming in from everywhere from all different faith groups.

“The Islamic Relief group came in and brought tons of water. At 6 p.m., prayer time, they just went out into our parking lot and laid down their mats and prayed after working their butts off helping,” he said. Karen Bunn, director of the mission, said she came to Jackson for one year and has stayed for 30 years She and her team have been sorting through mountains of donations that have grown even larger since the floods.

“People have lost everything. They are living in tents on their property and it is still raining. Can you imagine how they must feel?” she asked.

Holcomb and Calhoun said they have witnessed “God stories” time and time again. Such as the woman who came in and tearfully told them her washer and dryer and refrigerator survived the storm but were stolen by looters.

Just a short time later someone called saying they had just those items they wanted to donate, Calhoun said.
“The flood was bad, but this help is on the opposite end of the spectrum,” said Mitchell.

By - Kathy L. Gilbert, a former writer for United Methodist News Service, is a freelance writer in Nashville, Tenn.

Visit the Photo Gallery to see more images related to this story.