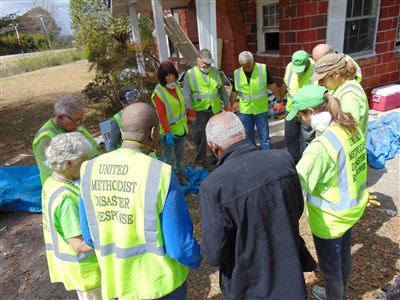 Alice Baldwin looked into the camera and smiled. That smile reflected a mix of emotions: gratitude, relief, thankfulness.

“God blessed me with a blessing and a miracle,” the resident of Lumberton said, referring to the volunteers from the Kentucky Annual Conference working on her flood-devastated home.

“I just pray and hope that God opens the windows of heaven and just blesses them in every way and every aspect of their lives. This here’s really a blessing for them to take their time to come down to help us.”

About 85 people from the conference accompanied Bishop Leonard Fairley on the mission trip to the region of North Carolina most devastated by Hurricane Matthew last October. They left Saturday, March 25, and returned to Kentucky on Friday, March 31.

Homeowner Robert D. Shaw was also overcome by the generosity of the Kentucky delegation. “I can speak on behalf of the city of Lumberton and for its people,” Mr. Shaw, a former member of the City Council, told mission participants. “We’re grateful to you for what you have done. May God bless you.”

Mr. Shaw recalled that the night of the hurricane, he awoke and headed to the bathroom. He put his foot on the floor – and was ankle-deep in water.

He escaped safely, but the damage was extensive.

Providing that kind of help to residents in need was a huge blessing to members of the Kentucky delegation, said the Rev. Randy Maynard, pastor of Christ United Methodist Church in Lexington. Rev. Maynard served as the trip coordinator.

“It couldn’t have been any better, I don’t think,” he said. The main glory sighting for him was the way people from all over the state, most of whom were strangers at the beginning of the week, bonded.

“They wanted to do this to be the hands and feet of Jesus,” Rev. Maynard said by phone after they returned from North Carolina.

Bishop Fairley, who came to Kentucky after serving for many years in North Carolina, felt led to organize and lead the mission trip in response to Matthew, which devastated much of North Carolina, particularly the Lumberton area. Lumberton, the county seat of Robeson County, has about 21,000 residents.

The hurricane caused devastating flooding across central and eastern North Carolina. More than a foot of rain fell 100 miles inland, causing streams and rivers to overflow their banks for days after the storm had passed, according to WRAL.com in Raleigh.

More than two dozen people in the state lost their lives, the TV station reported.

Those taking part in the trip paid $350 each for the opportunity to serve. Half of them stayed at Chestnut Street United Methodist Church, while the other half stayed at First Baptist Church, across the street, Rev. Maynard said.

He said the workers were divided into two teams: One helped gut badly damaged homes in preparation for their renovation; the other worked to rebuild damaged structures.

They were blessed with good weather and excellent hospitality from grateful residents, Rev. Maynard said.

Long days of work were supplemented with daily devotions, as well as a dinner Wednesday evening and a closing worship service Thursday evening.

“We’re talking about it still,” said Gary Locklear, conference lay leader of the North Carolina Annual Conference. “It was just an amazing experience.”

Mr. Locklear, one of the coordinators for disaster relief in the stricken area, said the worship service was powerful, with many testimonials about how the Holy Spirit moved the Kentucky guests during their visit.

Other groups had come in to help with mostly unskilled labor, he said. The Kentucky group had a number of skilled laborers, with superior tools, volunteering their time, he added.

Other religious teams have lent their assistance to the city, he said, including Baptists and members of the Jewish, Mormon and Mennonite communities. In addition, a number of college groups have helped, as well as delegations of Lumbee Indians, who live in the area, said Mr. Locklear, himself a member of the Lumbee Tribe.

Mr. Locklear said about 400 homes across North Carolina were affected by Matthew’s devastation, 200 of them in the Lumberton area alone. Some of them were affected by flooding back in 2008, but last October’s was much worse, he said.

The reconstruction phase of the recovery is just starting, Mr. Locklear said. “The city is so appreciative of the United Methodist Church” for its assistance, he said.

Rev. Maynard, the Lexington pastor, thanked Bishop Fairley for his support and leadership – as well as the others on the mission trip.

“I am extremely grateful for each individual who gave a week of their time when they could have been doing other things to come and work as diligently as they did,” Rev. Maynard said.

View the photo gallery from the Lumberton mission trip