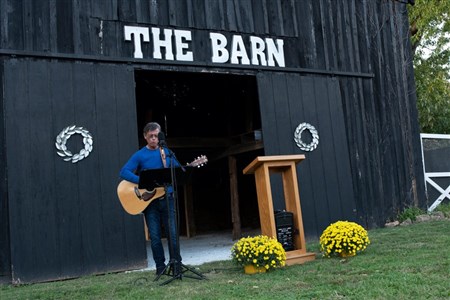 MONTICELLO, Kentucky – Standing in their backyard, Dennis and Stesha Flowers talk about their dream: A building that could serve as a permanent worship center where the Second Life ministry of Monticello UMC could meet for weekly services, Bible studies, health and wellness clinics, or just a place to hang out and play cards and watch television.

The couple oversee the Second Life worship community, which Monticello UMC started in 2015 to reach out to the struggling and marginalized in Monticello, a town of about 6,000 located on the southern side of Lake Cumberland close to the border with Tennessee. At the time, the church had identified a population — many of them with special needs – who were underserved by Monticello’s traditional church communities.

Since this past summer, Second Life has been holding its socially distanced Wednesday evening services in the Flowerses’ backyard on Kendrick Avenue, one of Monticello’s oldest residential streets. Their dark gray barn serves as a rustic backdrop to the outdoor service.

In the midst of COVID-19, in a struggling part of Kentucky with the long-term funding outlook uncertain, Dennis and Stesha, Monticello Pastor Robbie Shrout, and church lay leaders are having to reimagine Second Life’s ministry. Their challenge is a familiar one in 2020 for both traditional churches and new faith communities such as Second Life.

“Our heart breaks for those who are less fortunate,” Stesha Flowers says of why she and her husband felt called by God to lead Second Life after a change of leadership at the 5-year-old ministry.

“They need to feel just accepted – that’s the main thing. And I think they feel accepted here, and valued and respected.”

Monticello is located in Wayne County, on the edge of Appalachia. The city is known as the “Houseboat Capital of the World” thanks to its proximity to sprawling Lake Cumberland. It’s a picturesque town surrounded by Southern Kentucky natural beauty.

But there’s another, grimmer side to Monticello. The city has long experienced the same challenges that other areas of Appalachia, and much of the country, have faced: substance abuse, high unemployment, a poverty rate exceeding 30%. And in 2020, add in the weight of a pandemic.

All the more reason for Second Life to repurpose itself.

“We don’t want to backslide,” Pastor Robbie says in an interview in his office at the main church, located on the edge of Monticello’s small downtown area a few blocks from Dennis and Stesha’s home. In just a few hours, Second Life’s weekly Wednesday evening outdoor service will take place.

Pastor Robbie, who is in his second year of his pastoral appointment at Monticello, says things are clicking because of a strong leadership team at the church. “There’s such a thing as good questions that lead you to action,” and this team knows how to ask them, he says.

The can-do spirit of the church leaders “has been a real breath of fresh air,” he says. That’s one reason why he reached out to Conference Communications about visiting to help share the story of Second Life.

With the prospect of much of Second Life’s supplemental funding provided by the Kentucky Annual Conference and the Conference’s South East District going away after 2021, the leaders know “it’s on us,” Pastor Robbie says. There’s a sense of urgency but also a sense of excitement, he adds.

Part of that sense of excitement is the leadership Dennis and Stesha have provided. Pastor Robbie recalls how they came to their roles as Second Life’s leaders.

Dennis had become more involved when they were going through their leadership change about a year ago. It would soon become much greater commitment.

He called Pastor Robbie around 8:30 one evening, saying that God had spoken to him and Stesha about taking on a deeper role at Second Life. They met for lunch later that week to talk in more depth. “There’s no question God wanted them to be there, and they have done a phenomenal job with that ministry,” Pastor Robbie says.

Stesha, who is principal at an area vocational school, has a heart for the lost, Pastor Robbie says. Other members of the Second Life team are Stesha’s parents, Wade and Jeanie Upchurch; Carter Yeager; and Michael Whitehead. Dennis is paid a nominal salary as Second Life’s director; the others serve as volunteers.

Pastor Robbie says that Second Life was known for a time as “the food church” because its people ministered to the hungry. They still provide meals, but they actually have people who call the church their home – not just for the food but for the spiritual nutrition.

“No matter what box life puts us in, we all need Jesus,” he says.

What’s different about Second Life now? Pastor Robbie says it’s the ownership that the members have. People have always felt welcomed, he says, but that sense of ownership is deeper.

“I think there’s a mindset now that ‘this is our church.’ It’s taken some time for those seeds to be planted.” He adds: “We’re not here to judge you. We’re here to love you and share the love of Jesus with you.”

That loving begins just as soon as Dennis and Stesha step outside the door of their 122-year-old home, which they purchased in October 2019. On one side of their property is Kendrick Avenue. On the other side is a struggling neighborhood with significant drug problems.

“The mission field is right in our back door, literally,” says Dennis, a car mechanic who works in a shop at their home. Another building on the property was originally a two-room schoolhouse, since converted into a small home where their son now lives.

Attendance at Second Life has grown dramatically, and that growth started before COVID-19. At one point, attendance Wednesday night was around 20; now it’s not unusual to have 60-80, Pastor Robbie says.

“I think it all comes down to loving and relationships, and a sense of belonging,” Stesha says.

Many of the congregants are physically and mentally disabled. They often are unable to work. But they are willing to help at church. One lady comes to help and “she’s kind of life a mother here now,” Stesha says.

The ministry had been renting space at the local Senior Citizens Center for a few hours for its Wednesday evening services. Then in March the pandemic abruptly shut everything down, just as the ministry was starting to regain some traction.

They were able to resume services about four months later, after the Fourth of July, meeting outdoors at Dennis and Stesha’s house. The backyard is just large enough for several dozen folding chairs and a podium, which sits directly in front of the barn.

The dark gray barn remains a contender to become Second Life’s permanent home. But church leadership has not yet made a decision. If it is the barn, they have plans. “The hope and the dream is to transform it into something inviting,” Dennis says, with a small kitchen and restrooms, as well as a meeting space that could be used for worship and socializing.

Wherever they end up, Second Life needs a seven-day-a-week facility, Pastor Robbie says, whether that’s the renovated barn or another building the church ends up renting.

They are hoping to offer classes and workshops in good health and hygiene practices, how to balance a checkbook or craft a resume, and similar life-skills activities.

At some point, they might start a Sunday evening service, perhaps with a livestream, as many churches have begun doing on Sunday morning since the pandemic.

Wednesday evening worship
This particular October evening is beautiful – sunny, about 75 degrees, a slight breeze, with the autumn foliage in full splendor.

Dennis and Stesha are wearing black T-shirts emblazoned with “Psalm 95:1” (Oh come, let us sing to the Lord; let us make a joyful noise to the rock of our salvation!).

They are busy setting up, and Pastor Robbie and a couple of others pitch in, helping to carry Styrofoam containers – dinner -- to a table on the edge of the yard. People gradually trickle in to the backyard, some by car and some on foot.

Worship leader Dallas Hoskins arrives and sets up with his guitar in front of the podium and soon begins singing and playing contemporary sacred music. A couple of recent arrivals agree to impromptu interviews.

“Mr. Chuck,” who is 67, says he used to have a drinking problem. Then he connected with Second Life. “I’m proud that God took me away from all that.” He is now a regular member at Second Life and also attends Sunday morning services at Monticello.

Samantha Vaughn says she started coming to Second Life and grew close to the people there. She is a regular volunteer and has been helping now for about two and a half years.

“We try to do everything we can to help people in need. We have a great church family,” she says, expressing gratitude to Dennis and Stesha for opening their home to Second Life’s members.

When she lost her brother in February, they were with her. It has been a year of losses; she also lost a grandparent this summer.

The service itself starts a few minutes later. Pastor Robbie stands at the podium, recognizing birthdays and other celebrations. Then he reads a Scripture passage from John 14: 21-24:

“Whoever has my commandments and keeps them, he it is who loves me. And he who loves me will be loved by my Father, and I will love him and manifest myself to him.” Judas (not Iscariot) said to him, “Lord, how is it that you will manifest yourself to us, and not to the world?” Jesus answered him. “If anything loves me, he will keep my word, and my Father will love him, and we will come to him and make our home with him. Whoever does not love me does not keep my words. And the word that you hear is not mine but the Father’s who sent me.”

Pastor Robbie’s brief message that follows focuses on how we like to be in control. But that isn’t always how it works out, and it’s important to realize that regardless of circumstances, God’s prescription is always right. It’s crucial, he says, to keep His commandments.

His closing question to the congregation: What areas do you need to focus on and confess, “Not my will, Lord, but yours,” and live fully in obedience to Christ? He challenges them to think about it throughout the rest of the week.

Informality reigns as Pastor Robbie speaks. Most people are listening to his devotional, but several are standing or sitting on the edge of the gathering quietly interacting on their own. After the devotional, to maintain social distancing, volunteers hand out the dinner containers and people eat their fill. There is more than enough for everyone.

After about an hour, as the light from the setting sun starts to wane, the crowd begins to disperse. Dennis and Stesha, along with several volunteers, begin cleaning up and returning the folding chairs to a small storage shed. Before dark, the worship space is transformed back into a backyard.

Winter update
Since we visited Second Life in late October, the weather has turned too chilly and the sun sets too early for outdoor worship, Pastor Robbie says. In addition, the increase in COVID-19 cases has circumvented indoor worship, so as of late November, Second Life has not been able to meet for a few weeks. They are, however, still delivering meals on Wednesday evening.

He says that senior church leaders are continuing their discussions on a permanent home for Second Life.