Prayer in the midst of sorrow 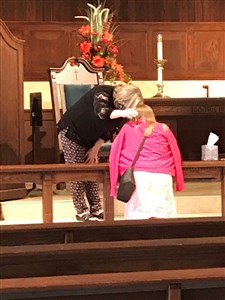 When protests erupted in Louisville following a grand jury’s decision to indict just one of three police officers involved in the shooting death of Breonna Taylor, Elizabeth Gibbs and her mother, Betsy, knew where they needed to go for spiritual solace: a prayer vigil at their church, Christ Church United Methodist.

Elizabeth Gibbs, 27, who has autism, wanted to pray the 23rd Psalm, among other things. So the two went Thursday to the second of three evening prayer vigils the Louisville church organized following Wednesday’s announcement of the grand jury’s decision, which touched off demonstrations in the downtown area. Two police officers were shot and wounded that night; both are expected to recover.

Betsy Gibbs added: “There’s so much anger and so much fear. That’s what was coming up for me as I was sitting in the pew just now.” 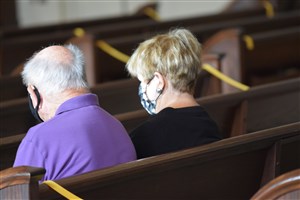 Christ Church, with 3,600 members, is the largest church in the Kentucky Annual Conference. Rev. Dr. Eric Bryant, the senior pastor, and his staff decided Wednesday afternoon to open the church from 5 to 7 p.m. Wednesday, Thursday and Friday for people desiring prayer and meditation time. The church also has been streaming the vigil on Facebook Live.

Louisville had been bracing for the results of the state investigation into the death in March of Taylor, 26, who was shot and killed by police during a botched raid March 13 as part of a drug investigation involving Taylor’s former boyfriend.
One officer, who has since been fired, was indicted on charges of wanton endangerment for firing his weapon in a way that threatened Taylor’s neighbors. None of the three officers were indicted on charges directly involving Taylor’s death.

Bryant said he and his staff had already discussed how the church should respond. When Louisville Mayor Greg Fischer’s curfew declaration referred specifically to an exemption for religious services, “we really heard that call. We felt like it was important to have a safe space for people to come and be in the presence of God.”

“People come to church and experience God very powerfully in worship on Sundays here,” Bryant added. “Why wouldn’t they want to come in times of distress like right now? Of course they would want to come.”

All told, at least a dozen people attended Thursday’s prayer vigil, which is open to anyone, not just Christ Church members.

The format was informal, with people quietly coming and going in the sanctuary and either sitting and praying in the front pews or coming to the altar for a pastor to pray with them. Soft piano music was playing in the background. Despite the spacious sanctuary, there was a sense of closeness and intimacy. 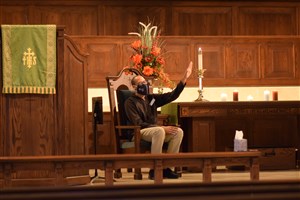 “Part of healing is learning how to recognize and respond to hurt. I believe we as Christians, as United Methodists, are called to the work of resistance,” said Associate Pastor Jacob Cogman, who was greeting people at the door and guiding them into the sanctuary.

“What we have witnessed is evil, and we need to know what our faithful response should be.”

Cogman, who is Black, said he was gratified to have the time and space to process what has happened in Louisville and elsewhere. Having that space is important, he said.

“We’re not going to effect change until we start praying with our feet, to create a world where I could not be the next Breonna Taylor.”

Rev. Patty Groot, Bridge Pastor at Christ Church, arrived about halfway through the vigil after returning from the Bridge Communities across town. Christ Church is located in an affluent area of eastern Louisville but has a long tradition of ministering in troubled areas of the city. The two Bridge Communities are at 25th and Market streets and 15th and Jefferson streets, both in western Louisville.

The demonstrations have almost exclusively been in downtown Louisville or the immediate surrounding areas, and Groot said the Bridge Communities both are far enough away that they haven’t directly been impacted. It was very quiet in the neighborhood when Groot was there Thursday, she said.

She described the mood as spiritually and emotionally exhausted. They have lived 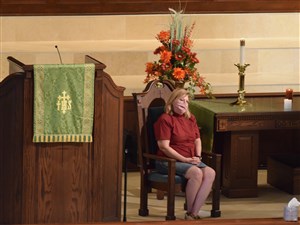 their entire lives facing redlining and prejudice. Some were distraught over the grand jury’s decision, but many are just trying to make ends meet, paying rent and finding groceries. “To fight for one more thing is just really hard,” she said.

One man did tell her, though, that this is not the end, that God will have his way with the world eventually.

Groot herself has been several times over the past few months to Jefferson Square, the downtown epicenter of the protests, which have gone on for more than 100 days. “That’s where the hearts are really broken.” .

Another major concern, she said, is people from out of town who come in and create problems – something that doesn’t sit well with the local protesters.

Church member Carol Ruzic came up to chat with Groot as she was standing near the entrance to the sanctuary. Ruzic’s late father was involved in law enforcement in Selma, Alabama, during the racial upheaval there in the 1960s, she said.

Ruzic, 71, was a young teenager at the time. “All of this has brought these memories back,” she said.

Referring to Christ Church’s prayer vigil, she said, “This is a great opportunity to come in here and sit and just reflect.”