Quarantine gives congregations big opportunities to be the church 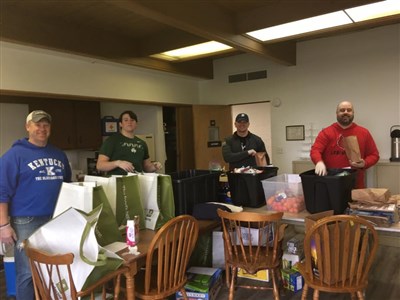 When it comes to the effect that COVID-19 has had on ministry, Rev. Shawn Mickschl’s flock – which includes many people in the service industry – has been particularly hard hit. In fact, Mickschl has felt it himself.

Mickschl, who serves as Pastor of House Church Ministries at Nicholasville UMC, is also part of the managing team at Copper River Grill in Nicholasville. In his dual role, he ministers to many on staff there. They were all impacted when the current situation forced Copper River to temporarily shut down.

So he and others have organized a regular gathering on Zoom, called Table 34, which has been meeting twice a day specifically to cater to people in the restaurant and bar business who suddenly find themselves with a lot of time on their hands. They meet daily at 1 p.m. and 9 p.m. EDT for 40 minutes.

“It is an attempt to Canoe this Mountain we have in front of us,” Mickschl said via Facebook Chat. He described it as “a virtual/digital gathering to facilitate sustaining community in the time of necessary isolation.”

Table 34 is named after the table at Copper River where servers generally sit when they have down time. If you’re interested in joining, reach out to Mickschl on Facebook or email him at shawn.mickschl@gmail.com; there’s always room for more.

Mickschl’s Table 34 is just one of many ways churches across the Kentucky Annual Conference are employing new ways to be the church – even when our physical buildings are closed indefinitely.  Churches large and small are not only finding new ways to worship online, they’re also serving their congregants and communities in new and different ways.

“I’ve been checking in with clergy and it sounds like a lot of folks are finding great, creative ways to be the church!” said Rev. Dr. Eric Bryant, the Conference’s Director of New Church Development.

Grace Kids: A Church for Children has been forced to drastically change how it ministers in its at-risk neighborhood in southern Louisville, Pastor Corey Nelson said. The building itself had to close, but his team has been serving snacks and meal bags outside the church weekdays at 4 p.m. to children or anyone else in need. On Wednesdays and Fridays at 6 p.m. and Sundays at 10 a.m., they are sending home warm meals in to-go containers.

In case of rain, they have access to a retrofit van from Christ Church United Methodist, called Church on Wheels. Any deliveries are handled via Big Blue, Grace Kids’ well-known and much-loved passenger van.

Asked Friday how it had gone the first week, Nelson was pleased: “More and more people every day,” he said from his home, where he’s been running the command center – coordinating volunteers, donations, manning the phone, and such – while his wife, Rickelle, undergoes treatment for ovarian cancer.

“It is absolutely killing me not being down there,” Nelson said, laughing.

Making sure children stay fed while they are out of school is also a focus for the River City campus of St. Matthews UMC. Rev. Derek Robinette and his team at River City have been assembling meals for around 60 kids a day at The Pointe, an affordable-housing complex not far from the church’s Lowe Road campus.

The apartment complex had reached out to Robinette out of concern that the children there would not have access to Jefferson County Public Schools’ feeding sites.

People wishing to help can bring their donations to the church at 4611 Lowe Road weekdays from 10 a.m. to noon. The team needs fruit or applesauce, prepackaged bags of vegetables, desserts, chips and breakfast bars. Or people can go online to donate at https://paypal.me/pools/c/8npXIxRPX4.

She said that this past Monday, the church staff met to brainstorm and determine what ministries were essential and which could be put on hold. Church on Wheels is one of the ministries working overtime: Wednesday evening it was dispatched to Grace Kids because of heavy rain that day. Thursday evening, the van – “a big box that we can do anything with” – was filled with more than 60 meals distributed to people in Louisville’s West End, Groot said.

Church on Wheels will be parked outside Christ Church on Sundays, Mondays and Tuesdays from 9:30 a.m. to noon for people to drop off donations to be distributed next week at Maryhurst and the Portland Promise Center.

“I see so much positive right now,” Groot said Friday afternoon. “Nobody is talking about a church split. I see us coming together to be the church. Until this happened we’d been more inwardly focused than outwardly focused. Now we’ve really had a chance to come together and be the church.”

Here’s a sampling of what other churches across the Conference are doing, both for their congregations and their communities:

Some churches are finding unique ways of virtual ministry to their congregations that other people can access. Rev. Chris Bartley, one of the pastors at Pikeville UMC, has posted a virtual prayer walk, featuring impressive photos of their stately historic building supplemented with relevant Bible passages. It can be found at: www.facebook.com/PikevilleKyUmc.

WHAT’S YOUR STORY?
We’re all in this together! We want to hear about your ministry and your glory sightings during these unusual times so we can share them with the Conference. Reach out to Cathy Bruce at cbruce@kyumc.org.