Reaching out to Puerto Rico 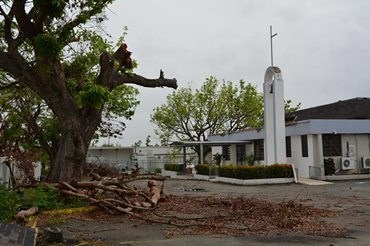 It’s hard to know how to start telling my story … maybe a little background will help!  Growing up near the Jersey Coast gave me lots to remember in regard to hurricanes:  the wind, torrential rain, losing power for several days, and sometimes a major mess to clean up in the yard.

With all of these images in my mind, I watched with horrific fascination at the powerful hurricanes of fall 2017 hitting the U.S. in Texas, Florida and everything in between!  I saw on Facebook one night a plea for prayers from a lady in Puerto Rico.  Their island was about to be hit by Hurricane Irma, and I watched in amazement as people from all over wrote “prayers” in their comments and sent it back to Ivette Diana.

I kept watching the radar and we prayed that the storm would go north of Puerto Rico, and it did!  Meanwhile, my new-found friend, Diana, and I got to know each other by messaging.  She assured me that God would take care of them.  We quoted scripture back and forth and words from hymns, etc.  We gave thanks to God as the worst of the powerful storm went north.

Then we saw that a new hurricane named Maria was heading straight for all the Caribbean Islands, P.R. and Cuba.  All the forecasts gave dire warnings, and I was afraid for the very worst.

The days dragged on and I was worried.  Diana was not able to let me know for many days that they were alive, but finally I heard and gave a shout!  Diana had experienced a terrible experience that she really couldn’t talk much about, but she was grateful for life.

And then, as we assured each other of God’s goodness, I discovered that she went to the Methodist Church in Carolina.  It was like a bolt out of the blue!  My new friend was a Methodist, just like me!  I was floored, totally amazed … and so was she!  It seems God works in mysterious ways, His wonders to perform. In Diana’s own words: “Wow, God is amazing.  He put us in contact to pray for each other specially in this hard time in Puerto Rico.”

Do you ever have a strong feeling that the Spirit wants you to do something for Him?  I do often. And through the means of modern technology, God sent Diana encouragement and a Word.   Two Methodist women, hundreds of miles apart and with an ocean in between, became friends.

We continued to write back and forth, and I excitedly began to tell this story to United Methodist friends at church or at conference committee meetings.  My DS found that it was a great story, too, and as time went on, we knew we had to be involved in the work of trying to help these people restore their island.

Diana sent me pictures of her church and the damage it sustained, pictures of her pastor, her family.  For weeks and months they all lived without electricity and water in the heat and humidity.  I was discouraged at the lack of help from Washington, D.C., and watched with tears running down my face at the terrible conditions in PR that I saw on TV or the internet.

Yet through it all, Diana hung in there in such a positive faith and belief!  “God is good all the time and I can testify about His love and cares with me and my family.” On Oct. 5th, “For me is the first day with cellular communication.  I have no power but we have water so is not that bad.  I can’t tell you what a terrible experience, but God take care of us all the time.  Thanks for your prayers we need it !!!!!  Love you in the name of Jesus !! One more time I can declare God is good all the time!!! Thanks God my house doesn’t have any damage (concrete walls) but there’s so much destruction in my Puerto Rico…so many families who lost everything….My church suffer so bad the damages but I know that my Lord help us to have a new Church.  Meanwhile we keep together praying, helping and waiting for the victory!

I assured her we were sisters in Christ and that we would be praying for her health and strength and praying that God would remove the terrible memories from her mind.

And so it was, back and forth, message after message all during the fall months, during Thanksgiving and on into Christmas. We discovered that we each have two sons.  Hers are both in college and even though the buildings are damaged, they started back at the end of October.  Her mother is 70 years old, as am I!  We shared recipes and traditions and family plans all that month.  She was always so grateful for the prayers and said of me, “I was a blessed woman, an instrument of God to carry a message of love and hope to others.”

Her beautifully handcrafted Christmas card said: “Blessings, love and peace to you and your family.  Your friendship is one of my most treasured gifts this season.  Merry Christmas, lots of love, Diana.”  Her card said “JOY” on the front and I thought to myself, “How amazing is that, in all the terrible struggles she’s had all fall and she sent ME a card to give me JOY!

There is nothing like it in the world:  the feeling of love, closeness and family that we have with other Christians, no matter where they are in the world – and in this case it was especially so because we shared so many common experiences and beliefs because we were both Methodists!  There is no doubt about it:  Diana was my best Christmas gift!

For now, Diana’s church:  Iglesia Metodista Villa Fontana, Carolina, P.R., is having Tuesday and Sunday meetings in a small Sunday school room that wasn’t too badly damaged.  She sent me pictures of before and after the storm and of her pastor and wife.  I also discovered that her church is participating in Emmaus Walks and Chrysalis, and that was exciting to me.  Diana continues to experience mixed emotions as she has a home but others have none and so many are suffering.

What a wonderful gift God gave me this fall: I have a friend for life in Diana. We will always stay connected because of our experience.  My hope and prayer, along with many others here in Kentucky, is that we, the Kentucky Conference of the United Methodist Church, will be able to do our part to give freely to help these dear people in Puerto Rico, many of whom have lost it all!  In the words of Diana, “I know God will answer our prayer and give us what we need to have a beautiful church, in His time.”  Amen, Diana, Amen!