Responding to disaster: Southeastern Kentucky flooding assistance drives home the point that we are connectional … and stronger for it 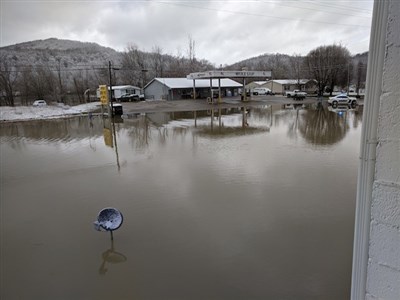 When recent heavy rains caused rivers and streams to overflow their banks in southeastern Kentucky, the Kentucky Annual Conference was ready to help.

Morse said it’s a great example of how our connectional structure allowed him and his volunteers to quickly respond. It’s also a reminder that we need to continue to stay prepared. He also said that he is grateful that so many churches have been faithful to donate to the Conference’s disaster-relief fund.

“It’s an example of grace, and the faithfulness of our Conference and individuals, that they understand the need and respond to it,’ he said.

Even if a church contributed just $5 a month, it would allow the Conference to be ready to respond to events such as the current flooding. “Every gift is valuable, no matter how small, and every gift is appreciated,” Morse said.

Thanks to that faithfulness and generosity, Morse was able to collect and deliver the buckets to Barbourville in three days. He could request help from UMCOR, and the UMC’s disaster-relief agency could have a tractor-trailer deliver a load of buckets – but it could take up to a week.

The 445 flood buckets were roughly half of the supply around the Conference. There are about 300 still stored in Henderson, in the Owensboro District. There are small pockets totaling about 150 stored elsewhere, and when necessary can be quickly retrieved, he said.

“It’s a marvelous example of our connectional system,” Morse said.

If every church put together one or two buckets and each district found a spot to collect them, it would help, he stressed. UMCOR has instructions on its home page, www.umcor.org, on how to assemble cleaning, hygiene and school kits.

And the need is always there. The floodwaters may recede quickly, but that’s often just the beginning of the help a region needs with extensive cleanup and rebuilding. If churches or individuals want to help, they should let their district coordinators know, and Morse and his team will consolidate that information. That would guarantee purposeful work gets done.

The flooding, and need for a response to it, has driven home the need for more people in the Conference to be trained and certified as Early Response Team (ERT) members.

About 30 people across the Conference are currently trained in disaster response, he said. But that’s just the start of what is needed. The goal in the next four years is eventually to have at least 70 people trained in each district, he said.

An ERT training is scheduled for Saturday, March 28, in Shelbyville. Morse also said an advanced “train the trainers” class is in the works for late April. Graduates of that class then would be certified to conduct ERT trainings.

Morse said he and his team work very effectively with other disaster-response agencies, including the Southern Baptist Disaster Response, American Red Cross, and the Christian Appalachian project to provide immediate assistance in various forms.

Which brings us back to the flooding in southeastern Kentucky. Rev. Karen Stigall, the Superintendent for the South Eastern District and Red Bird Missionary Conference, said Friday morning that the floodwaters were receding. The worst of the most recent storm that initially was headed for the area passed north, largely sparing the Cumberland River basin.

Still, she said, “There’s going to be a lot of damage, and they’re going to be discovering it over time. … It’s really too early to tell what kind of repairs or rebuilds will be required.”

Like Morse, she cited the UMC connectional system that allowed her to quickly assess the situation in various communities and at churches by reaching out to the pastors, particularly in Harlan, Bell, Knox and Whitley counties, the hardest-hit areas.

Stigall also stressed the importance of training across the Conference so we are better able to serve our churches and our communities.

“Our Methodist presence would be stronger in our communities. … Now would be the time for people to see the need for training.”