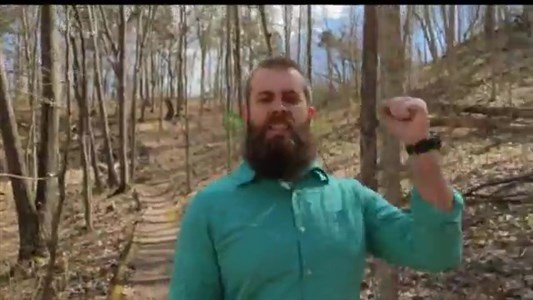 Rev. Craig Taylor says he’s waited nearly 10 years for his undergraduate degree in television and radio production to finally pay off in his ministerial work.

COVID-19 is giving him that chance – and has been a great opportunity for his church, Stovall UMC in Radcliff, to make the most of a challenging situation. He and his team are drawing on his training to make their livestream sophisticated not only with multiple camera and microphone angles, but also creative locations.

“It’s going well,” Taylor said in a Zoom interview Monday, March 30. “I think the church has adapted well to the current situation.”

One-third of the congregation of Stovall, a small-town church that typically averages 60-70 in worship and just celebrated its 150th anniversary, is older and therefore classified as high-risk for serious complications from the coronavirus, Taylor said.

The church had been livestreaming since December 2018, a few months after Taylor arrived at the church after serving for three years at Masonville UMC near Owensboro. As a military-based community – Radcliff is adjacent to the Fort Knox Army post – a sizable number at the church is away for long periods during deployments and training missions. Adding livestreaming was a way for them to stay connected with their families during worship, Taylor said.

Livestreaming on Facebook Live had always been on the “back end” until early March, when social distancing protocols required pastors and their worship teams to become, if not techno-savvy, at least techno-proficient. That’s where the Taylor’s Murray State University education paid dividends.

When they started livestreaming during Advent in 2018, it was an effort to make sure their shut-ins were still able to follow the church service. They set up one smartphone in the balcony to broadcast the service. It worked, but it was pretty unimaginative.

Typically, they would have up to 10 people watching, mainly members who couldn’t attend for various reasons, Taylor said. But over time, they started to notice that other people, sometimes strangers from around the country, would be dropping in, metaphorically “peeking in the door to see what’s going on.”

One family actually ended up becoming regular attendees because the husband – a retired member of the military – has a medical condition that makes it hard to sit comfortably in a church pew. They haven’t formally joined the church, but they watch regularly on Facebook Live, Taylor said.

The church also is well-known in the area for hosting an annual ice cream social each summer, dating to 1968. Not just the church, but many in the community show up, Taylor said. Even this traditional networking opportunity has attracted more people since they began promoting it on social media, he said.

Which brings us to early March and the COVID-19 isolation protocols. Kentucky Gov. Andy Beshear on March 11 urged churches to cancel live services starting the following Sunday.  While the church was already starting to see the possibilities of virtual worship, the sudden and unexpected quarantine prompted some technical innovation virtually overnight.

Like it or not, pastors were about to become televangelists.

Stovall, though, already had a jump, thanks to its forward-looking emphasis. OBS and NDI Tools technology has “revolutionized the broadcast industry,” and churches now can invest in the same equipment at very little cost, Taylor said. In the past, equipment to produce quality livestreams would have cost thousands of dollars, he said.

(OBS is a virtual-camera system that allows streaming to multiple platforms simultaneously, such as Facebook Live and YouTube. NDI Tools is a suite of apps that facilitates workflow integration.)

The technology – and a little imagination on the part of Stovall’s team – has resulted in a much-enhanced digital worship service. Rather than just one camera stationed in the balcony showing a nearly empty sanctuary, they have set up three cameras at different spots in the first three rows – places where people would normally be sitting during church. And they placed them at head height.

They also have placed microphones at various spots in the sanctuary so enhance the audio experience. “You would hear what you actually would hear if you were in church,” Taylor said.

More than one pastor has remarked that preaching a sermon while looking at a camera, rather than making eye contact with people in the congregation, feels odd. That was less of an issue for Taylor, given his broadcast training, though he concedes that “it’s really weird to stare at a camera while preaching.”

Their first week, the main focus was moving the cameras closer in the sanctauary. Then they got even more creative.

Taylor is doing a Lenten sermon series called Sacred Encounters, based on stories in the book of John. So they moved their services outdoors to the nearby Saunders Springs Nature Preserve, about a five-minute drive from the church, to tie the sacred encounters to the outdoors.

Taylor gave his sermons while traipsing through the preserve, carrying a camera on a selfie stick to make it look as if he had a camera operator walking backwards in front of him. (He did have someone walking in front to help show him where potential walking hazards were to minimize the risk of mishap during the live broadcast.)

He and his team practiced several times to get the feel for it – and he had to get used to preaching a sermon while walking in the woods. Sunday, March 29, they ended up at one of four cabins that once belonged to the historic church that have been relocated to the nature preserve.

“We were still worshipping in Stovall; it was just from a different time at Stovall,” Taylor said.

Adding to the challenge is that Saunders Springs was recently closed to the public because of the pandemic. Fortunately, Taylor and his team received permission to hold virtual church services there.

The first week of livestreaming, they had 22 screens tune in, he said. Many screens have more than one person in a household watching, so precise viewing numbers are hard to gauge. But the trend is undeniable: The two Sunday that they broadcast from the nature preserve, they had 36 screens, and based on screen demographics, they were pretty much able to determine that almost the entire church family was tuning in.

And it’s not just the Stovall family. His 84-year-old grandmother tuned in from Newton, North Carolina, while taking her daily walk, Taylor said.

This weekend they plan to be back in the church for Palm Sunday. “We’ll be more traditional, but we’ll also continue to be different,” he promised.

The 30-year-old Taylor – a self-described extrovert who some will know from his portrayal as John Wesley during Annual Conference – urges churches not to be timid but to use this time to develop their social media platforms with an eye beyond COVID-19. That’s definitely Stovall’s strategy.

“We’ve had a lot of fun – probably too much fun, honestly,” he joked. “But the risks have paid off.”

STOVALL ONLINE
To see what Stovall UMC has been doing with its Facebook Live broadcasts, or to tune in live Sundays at 11 a.m., go to: www.facebook.com\stovallumc\videos.