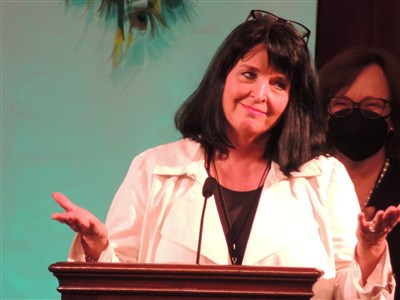 LAKE JUNALUSKA, N.C. – Two of three bishops were elected Wednesday, Nov. 2, as Rev. Tom Berlin, the nominee from the Virginia Conference, was elected on the fourth ballot, receiving 213 of the 208 required, or 61.56% of the vote.

Then after 9 p.m. – as Kentucky Bishop Leonard Fairley was presiding over the session – a second nominee, Rev. Connie Shelton of the Mississippi Conference, was elected on the 12th ballot.

Kentucky’s nominee, Rev. Dr. Iosmar Alvarez, remained in the field, as the Southeastern Jurisdictional Conference wrapped up the first day of the 2022 session. More ballots will be taken Thursday to fill the final slot. 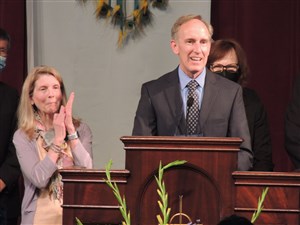 Berlin – elected late in the afternoon – received a standing ovation from the room as he headed to the podium to speak on his election, thanking his wife, members of his church who made an eight-hour drive to support him, the other delegates for the ways they have formed his faith and helped in his sanctification, and the bishops who have enabled him to serve.

“You all have been such a great blessing to my life and to be elected as bishop is a singular great honor,” Berlin said. With a nod to the message from opening worship that morning, Berlin added, “We can do nothing without Christ and anything with Christ that Christ desires, and there is nothing good I’ve been a part of that I’ve done myself.

“It is oddly humbling to stand before you and accept this special assignment.”

Rev. Karen Stigall, the conference’s superintendent, presented the proposal to change the name, citing its 100-plus-year history of serving the people of Central Appalachia, making disciples, providing Christian education, and facilitating fellowship in that region.

“We have a new story to tell, a new future to look forward to,” Stigall said, introducing a video telling Red Bird’s story.

It was approved by a show of hands, then Fairley was asked by presiding Bishop David Graves to come forward and pray on behalf of the newly named conference.

“Lord, although this is a small conference, you have shown through 100 years how you have the ability to take ordinary people and do extraordinary things through them,” Fairley said. 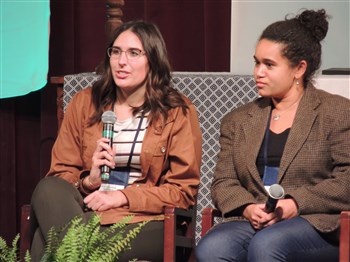 Fairley was the presiding bishop during the SEJ’s after-dinner meeting.

A four-person panel of young adults, led by moderator Rev. Lisa Yebuah, spoke to how they see the current and future church. Panelists included Kentucky’s Bethany Harting, who also is part of Kentucky’s delegation. In response to a prompt from the panel moderator, Harting said that there is a “heaviness” during this liminal season of the church.

The panel was speaking in between episcopal nominee ballots and results. Several videos also were shown as results were tabulated, then just before the No. 12 ballot results were shown, Fairley announced: “We have an election,” and Shelton came to the stage to be congratulated.

Brodie is a writer with the South Carolina United Methodist Advocate. Wild is a member of the Kentucky Conference staff.