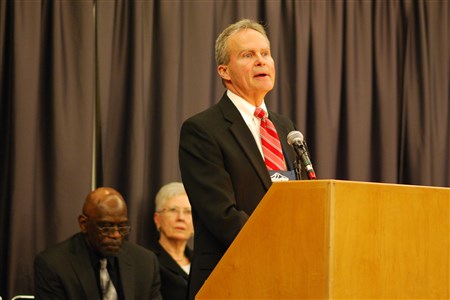 Tuesday, May 17 during lunch at General Conference, seven of the 14 SEJ episcopal candidates addressed SEJ general conference delegates in the first of two planned lunchtime gatherings.

Tom Grieb, pastor of Centenary in the Lexington district, gave us insight into who he is and what he is passionate about, declaring that he is, " passionate about Discipleship" and stating that at his church they are considering what it means to be in deep relationship with one another and with God.

Tom shared that it is hard for him to talk about himself, but said that he would describe himself as, "a solid leader, hard worker and a responsible decision maker" who provides a non-anxious presence.

Tom said that "if elected I will give my all to the office of bishop in support of Christ and His kingdom."

The other seven candidates will address general conference delegates during a lunchtime gathering on Wednesday.