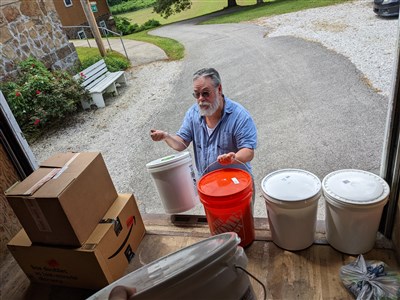 The United Methodist Church continues to be involved in the response to recent deadly flooding in southeastern Kentucky.

Rev. Karen Stigall, District Superintendent of the Kentucky Annual Conference’s South East District and the Central Appalachian Missionary Conference, said most of the “mucking out” of flooded homes and businesses is completed and the UMC and its churches and agencies are looking to move into the next phase.

Stigall will travel Saturday, Aug. 27, to Whitesburg in Letcher County to assess damage at Whitesburg UMC. Then Sunday, Aug. 28, she will tour with Lara Martin, Director of U.S. Disaster Response for UMCOR, the United Methodist Committee on Relief. The tentative plan is to start the day worshipping at Hindman UMC in hard-hit Knott County, then also tour Letcher and probably Perry counties, Stigall said.

She said that most impacted families have received immediate relief, such as temporary but stable housing. Very few repairs have been made, but people at least have a roof over their heads, she said.

Nearly 40 people died in the flash flooding in late July, and hundreds of homes are in the process of being assessed. The Central Appalachian Conference (formerly Red Bird) is adjacent to the damaged area and will be hosting UMCOR teams that are preparing to travel through the district to help assess damage and begin to plan the recovery work.

On another front, Al Miller, Director of Disaster Ministries for the North Carolina Annual Conference, has been in Kentucky for nearly two weeks assisting with support. Bishop Leonard Fairley is currently serving as episcopal leader of the Kentucky, North Carolina, and Central Appalachian conferences.

Miller and Butch Huffman, another member of his team, have been working with Jim Morse, Kentucky’s Disaster Response Coordinator, in preparing Early Response Training sites.

Miller said disaster relief centers are being set up at six sites in the area. The UMC response is part of the larger Long Term Recovery Groups, or LTRGs, which focus on rebuilding and restoring normal economic activity to a damaged region.

The flooding in southeast Kentucky is some of the worst that longtime residents can recall, and it comes less than a year after deadly and devastating tornadoes struck in the southwestern part of the state.

“Kentucky is overwhelmed right now with disasters. Parts of both ends of the state have been devastated. We’ve never faced this before,” Stigall said. Still, the response from the UMC and its connectional DNA has been heartening.

“I’ve been contacted by United Methodist Churches all over the country,” even as far as California, she said.

We are looking for work teams of all skill levels, or anyone with a servants’ heart and a desire to be the hands and feet of Christ, to volunteer in the areas in our conference and The Central Appalachian (formerly Red Bird) conference that were affected by the flooding in July. Come get your hands dirty or help in some other way. To find out more information or register a work team, email us at disasterresponse@kyumc.org. We look forward to hearing from you!