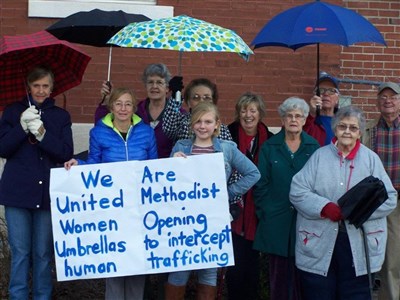 The First Guthrie United Methodist Women and men opened their umbrellas in defense of human trafficking.

On Sunday, February 7, 2016, the Super Bowl will take place at Levi's® Stadium in Santa Clara, California. And like any big sporting event, a game like this intensifies the space where human trafficking can occur. That's why United Methodist Women has asked members to join the Intercept the Traffickers photo campaign and open your umbrellas to raise awareness of human trafficking. Thousands will travel to the San Francisco Bay Area to take part in Super Bowl festivities. Among the travelers will be those arriving by force, fraud, or coercion—they will not be there of their own free will but as victims of human trafficking.

The Super Bowl ranks second only to Thanksgiving as the day on which Americans consume the most food, and some of those who are trafficked will be serving food in restaurants or at catered parties related to the Super Bowl. Others will clean hotel rooms, wash dishes, tidy nail salons, deliver dry cleaning, or wash windows. Some will be trafficked as sex workers for escort services or in "gentlemen's" clubs.

To express our belief that we can help survivors of human trafficking live as whole persons, we invite you to join us by Opening an Umbrella to form a virtual line of defense around Levi's® Stadium, to prevent and protect those who may be victimized by human trafficking.

If you plan to be in the San Francisco Bay Area for the Super Bowl, we hope you will join us as we open umbrellas together on the streets of San Francisco and all around the Bay Area! If you aren't traveling to Levi's Stadium® this Super Bowl season, you can still be a part of our umbrella line of defense.
What is an "umbrella" defense? It is named after the football defensive play created by New York Giants coach, Steve Owen. The innovative formation (it was 1950) enabled the Giants to shut out the then-formidable Cleveland Browns.

As writer, Cedah Mayo wrote in her poem Umbrella Protection:
Many lives before I have been beaten down
My spark crushed by the cruelness of mankind
My trust broken by selfish hearts
I dream of when I shall return to the land of dreams
Until then I must build my arms stronger
To hold my umbrella for longer
To protect my human me from the negativity that I face
From the human race.

Let's name human trafficking as the crime that it is. Let us commit ourselves to ACTS of prevention and protection so that those who are victimized can move from trauma to thriving. Behind your umbrella chart a strategy to pass laws that prosecute the traffickers, not the victimized. Let our umbrella line of defense bear witness to the strength of survivors and to our partnership in their journey to wholeness.

Open your umbrella and take your defensive position to intercept the traffickers so that justice can reign.

United Methodist Women members are called to listen to the mandate of our faith to help the vulnerable. Between now and January 29, 2016, take a picture of your United Methodist Women's group holding umbrellas together with letters spelling out, "We are United Methodist Women opening umbrellas to intercept human trafficking." The photo of your umbrellas will be connected to others we receive, and you will be part of our Umbrella Line of Defense around the stadium. In your neighborhood, at church, in the grocery store, and at work, become a part of our circle of protection and prevention to intercept human trafficking.

The 800,000 members of United Methodist Women can open umbrellas that shut down the traffickers and embrace survivors. What a powerful statement of our ongoing work to say we can form the line of defense to intercept human trafficking, wherever it exists in the world! In your church, the store, at work; Lets Open Our Umbrellas!

Everybody can join the United Methodist Women's Umbrella Defense to intercept the traffickers!

Sharing our #UMWumbrellas photos will be a great way to show how we intercept human trafficking and will help raise awareness that this crime affects families and communities everywhere.

•Send your pictures to your conference communicators to share on conference websites and in newsletters.

United Methodist Women coordinates with secular as well as ecumenical partners to work against human trafficking.