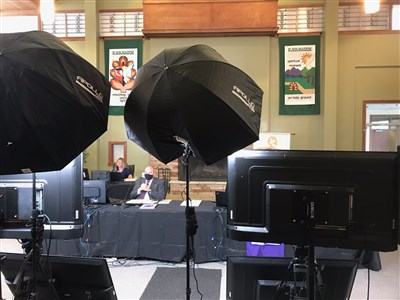 The 2020 Annual Conference – broadcast virtually because of COVID-19 – began Sunday with a public laity session followed by a closed clergy session.

John Denham, the Kentucky Annual Conference’s Lay Leader, was shown live from his home in Maysville. But most of the presentations, reports and sacred music that normally would be presented at the podium were prerecorded, including a four-minute introduction from Bishop Leonard Fairley, who focused on the challenges of furthering the Kingdom during a worldwide pandemic.

“I commend the laity for their witness and courage to look forward hopefully, particularly during this season of pandemic and social unrest,” Fairley said, adding that he has met with the Board of Laity via Zoom.

“It has been a gift to watch, listen, learn, and work alongside you as you have prayed for God’s courage, wisdom, and power of the Holy Spirit in your response to both the challenges and opportunities inherit in these times.”

About a dozen people presented short reports or testimony, including the lay leaders from the Conference’s nine districts.

Lay and clergy members of Annual Conference watched on a special webinar platform that they also will use during Tuesday’s business meeting. They will use that platform for voting and also asking questions or otherwise interacting during the meeting.

Cathy Bruce, the Conference’s Associate Director of Connectional Ministries for Communications, said about 225 people were watching Sunday’s laity session on the webinar platform and about another 80 on the Facebook Live feed.

The start was delayed for about five minutes because of a technical glitch. Bruce apologized to anyone who had difficulty viewing it either on the webinar or Facebook Live platform. She said the problem has been resolved and should not be an issue Tuesday.

The public can watch Tuesday’s proceedings on the Conference’s Facebook Live feed at https://www.facebook.com/KentuckyAnnualConference starting with the worship service at 9 a.m. EST. Those watching on Facebook will not be able to actively participate in the meeting, however. You do not need a Facebook account to watch. 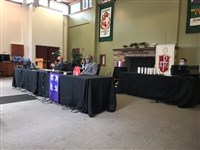 The virtual Annual Conference broadcast is originating from the Conference headquarters in Crestwood. GNTV, Conference Communications and technical support staff have constructed a studio to broadcast the proceedings to clergy and lay members across the Conference.

No events are scheduled for Monday. Originally the Ordination and Commissioning Service was to take place from Louisville’s St. Paul UMC in the evening, but because of the pandemic it has been postponed until the 2021 Annual Conference in June in Owensboro.