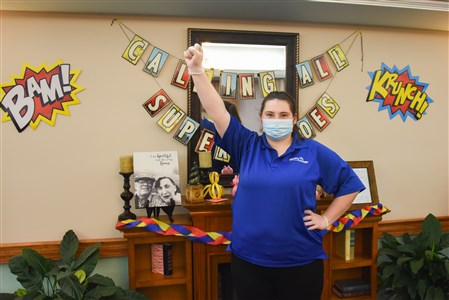 As impacted as we’ve all been by COVID-19, imagine having the responsibility of keeping hundreds of seniors – by far the virus’ most vulnerable group – safe and healthy.

That’s what has been consuming the staffs at Louisville’s Wesley Manor and Wilmore’s Wesley Village since the potentially deadly virus first impacted Kentucky and the nation in March.

“It’s a scary time,” said Jerry Hoganson, President of Wesley Manor, which has about 200 residents who receive various levels of care ranging from independent living to skilled nursing.

One of their biggest challenges has been keeping the potentially deadly virus out of their buildings, and “so far we’ve had success doing that,” Hoganson said.

That challenge was echoed by Alan Beuscher, Wesley Village’s Vice President for Community Relations. Wesley Village’s mission, “Celebrate life in Christian love,” these days has been translated into “protecting life,” he said.

Each community is a state-designated CCRC – Continuing Care Retirement Community – meaning they offer all levels of care for their senior residents. Both are ministries of the Kentucky Annual Conference, though neither receives direct funding from the Conference.

Here are brief snapshots of both communities outlining how they are addressing the threat posed by COVID-19:

Wesley Manor, with about 200 residents, has 60 independent living patio homes, 41 assisted living apartments, 28 nursing care apartments for early-stage dementia, 64-bed skilled nursing and rehabilitation. It is located at 5012 E. Manslick Road on the southeastern side of Louisville.

Hoganson, who has overseen Wesley Manor since 2010, said they are doing OK, considering the situation. The biggest issue has been keeping the virus out of the building, and “so far we’ve had success doing that” by limiting interactions as much as possible. But the staff is out in community and supervisors are continually educating them on ways to limit exposure.

One staff member, a nursing assistant, tested positive for COVID-19 a few weeks ago and experienced mild symptoms. She has since recovered and returned to work, Hoganson said. To date, that is the only positive case Wesley Manor has experience among either staff or residents.

Nearly 80 senior homes across the state have reported cases of the coronavirus, according to The Courier Journal. As of May 7, a total of 167 people had died; just two of the deaths were staff members, according to the newspaper.

At a time when many senior communities have been hit hard, Hoganson said safety procedures – such as education and keeping nonessential people out of the buildings – as well as God’s guidance, and perhaps a bit of luck, have worked.

Another challenge is the emotional state of residents and family members, Hoganson said. The staff has noticed residents are experiencing more falls and bouts of anxiety. They are having to prescribe more medication to ease anxiety, “but that’s not a good situation, either.”

From a physical side, Hoganson noted, limiting time is good. From an emotional side, it’s hard – though he stressed that he fully supports the social-distancing policies that Gov. Andy Beshear’s administration has instituted.

The fact that their buildings are separated has helped. The dining room was closed early in the pandemic. All food is prepared in the assisted-living kitchen and transported elsewhere. Some patio home residents normally eat in the dining room; they are now getting meals delivered.

It’s been a seven-day-a-week job. “I’m only working half-time, which is only 12 hours a day,” he said, laughing.

Because their revenue hasn’t changed much, they’ve been able to keep their entire staff on the job. They’ve had some increased costs because more people have been taking time off. They’ve also increased hourly wages by $1 and also have been giving out bonuses to staff.

The pandemic has affected everyone to a certain extent, both staff and residents, Hoganson said. Some of the latter who watch the news all day are subjected to the drumbeat of depressing news. Residents also are wearing masks and staying the socially prescribed 6 feet apart.

The staff is doing what it can to help keep spirits up. Hallway bingo is one approach. Residents sit in their doorways and play. Since they can’t meet in the chapel, the chaplain has been doing hallway meditations on a rotating basis.

The ice cream shop is open three days a week; movies are being shown on the Wesley Manor channel, complete with ice cream and popcorn deliveries. A few other twists have made things interesting – parading horses around the grounds, having a bagpiper walking the grounds playing. Anything to help stimulate and distract, Hoganson said.

“We’re pretty fortunate to have the technology we have these days,” he said. “I can’t imagine having something like this back in 1918 (during the Spanish flu pandemic). There was no immediate mass communication. It had to be a lot more difficult then.”

Wesley Village also has about 200 residents – half still fully independent in patio homes. Half are in some level of health care. From licensed personal care (assisted living) and skilled nursing care. It is located at 1125 Lexington Road in Wilmore, less than a mile from Asbury University and Asbury Seminary.

Patio home residents can come and go and receive guests, although they are strongly encouraged to limit visitors as much as possible, Beuscher said. “I would say the vast majority are not seeing visitors whatsoever.”

In the areas of higher care, spouses cannot be with each other, though they can communicate by phone through glass partitions.

The staff is providing the main meal of the day to people on campus, and many also get a second meal. They’ve also added a new level of shopping and errands, Beuscher said, with two staff members going to the grocery, pharmacy and other locations on behalf of residents, at no extra charge.

We try to do what’s best for our residents. That’s first and foremost,’ said Beuscher, who has been with Wesley Village since it came into being 26 years ago.

All staff and anyone else with business must come in the main entrance and have their temperature taken. Independent-living people can come check their mailboxes or stop in the library, but they also get their temperatures taken. People are encouraged to exercise on a walking path located on the grounds using social distancing.

Impromptu hymn sings, a kazoo circle, music and movies are some of the activities to keep residents’ spirits up. “About once a week we’ve tried to do something at a distance to show folks are praying for them and wishing them well,” Beuscher said.

Wesley Village’s dining areas in the higher-care areas are still open, with social distancing and other safety protocols strictly enforced. President/CEO Glenda Creech is concerned about too much isolation and always says “there’s a difference between ‘safety’ and ‘sanity,’” Beuscher said.

(Creech, a nurse by training, has been heavily involved in overseeing quarantine operations and was too busy to be interviewed for this article. Beuscher’s time has been reduced by half, because he normally oversees the Wilmore Senior Community Center, a partnership between Wesley Village and Wilmore.)

Wesley Village applied for a received a loan as part of the federal relief program. Their main expense during the pandemic has been when day cares shut down and staff had to stay home to care for their young children. Wesley Village relies on “agency staff” to fill in, but the cost is much more expensive, Beuscher said.

Beuscher said Creech, who has overseen Wesley Village for 15 years, wanted to stress that the leadership team really appreciates the front-line staff going above and beyond, which was the impetus for the superhero campaign.

“People really are putting their lives on the line when they go anywhere outside to work these days,” Beuscher said.

Wesley Village just recently began an aggressive campaign to test staff for COVID-19. As of Monday, May 11, they had received results of 91 tests conducted the previous week – all negative.

“We are indeed grateful to God for His hedge of protection around this community to date and ask all to continue lifting us up in their prayers – as well as for all who live and work in long-term-care communities around our state, nation and world,” Beuscher said.

If and when they get a positive test, they’ll be ready, he said. In the meantime, they’re carrying on as closely to normal as possible – celebrating birthdays, anniversaries and other milestones. Recently, Art and Nancy Stovall celebrated their wedding anniversary there. The couple lost their first spouses and married two years ago.

Although it was a quiet and socially distanced celebration – only the couple was present in their apartment – it was still a special occasion, with Wesley Village’s master chef preparing them a steak dinner. The celebration even received coverage from a Lexington TV station.