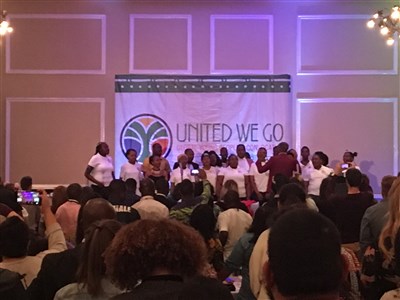 Eliza Love’s recent trip to Johannesburg, South Africa, for a youth and young adult conference convinced her that the United Methodist Church has a bright future, even though “there’s a lot of work to do.”
“I think the young adults and youth feel very hopeful about the future of the Methodist church and how we move forward,” Eliza said shortly after returning from the Global Young People’s Convocation, or GYPC, held in late July.
Eliza, 20, who just started her junior year at Birmingham-Southern College, was chosen as one of five young adult delegates from the Southeastern Jurisdiction to attend the conference, which is held every four years. Five youth delegates also were chosen.
More than 330 people from 40 countries gathered for five days of conversation, worship and fellowship. The delegates discussed issues affecting young people and church unity. The theme was United We Go.

Much of the conference involved her meeting in a small but diverse group to discuss racism, sexism, and other difficult topics. She and two other Americans were joined in their group by representatives from Kurdistan, Nigeria, and Sierra Leone.

Eliza said that despite fundamental differences among members of the group based on cultural context, there was no outright hostility – and that was one of the key themes of the conference.

“I guess the biggest part of what I heard was how we go forward,” she said.  She called the opportunity for frank and open discussion with other people between the ages of 19 and 30 “a nice breather from what we’ve seen as young adults in the church.”

Some of their discussion dealt with the current UMC debate over human sexuality, she said. During the conference, she and other participants discovered some common themes despite their differences.

Eliza was recommended by Dave Cohn, director of Aldersgate Camp & Retreat Center, where she has been on staff for the past three summers. Nathan Calvert, the Kentucky Annual Conference’s associate director of ministry with young people, also assisted. 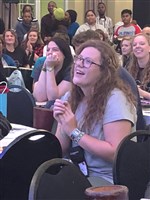 “I have seen a great deal of growth in Eliza and know she has a very bright future ahead of her,” Rev. Cohn said. “She is a clear leader that the staff looks up to and has very high morals, which I respect a lot.”

Mr. Calvert added, “Eliza just seemed like a natural fit to represent not only the Kentucky Annual Conference in Johannesburg, but all Methodists.”
Eliza said she had never heard of GYPC until about a year ago, and “it sounded awesome because I love traveling and I love the Methodist Church.” She found out in the autumn that she had been selected as a delegate.

Without any idea who else was applying, she decided to take the plunge. “It was basically a shot in the dark. I figured I’d give it a try.”

Eliza had traveled abroad before, to Italy in January 2018 and to Honduras on a church mission trip as a 16-year-old. The direct flight from Atlanta to Johannesburg took 16 hours. She had about a day to acclimate to the time change (Johannesburg is six hours ahead of the Eastern time zone) before the conference.

It wasn’t all work in Africa. While there, she and other participants got to go on a safari and saw lions, warthogs, giraffes, and zebras, among other animals. And she made some great friends from around the world.

Eliza is a 2016 graduate of Bullitt East High School, where she played basketball.  She is the daughter of Rev. Julie Love, the KAC’s director of Connectional Ministries. Rev. Love also was in Johannesburg as a GYPC speaker.

Eliza is a member of River City UMC in Louisville and was on its lead launch team in 2015. She is a religion major at Birmingham-Southern and is seriously considering a career in ministry and might also attend law school. With her mother holding a critical position in the United Methodist Church, Eliza has literally grown up in the KAC.

“”It’s great that I’ve been able to grow up around people who are so loving and caring,” she said.