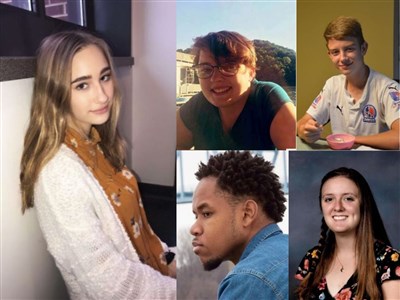 Between our changing society in general and uncertainty ahead of the special General Conference in February, there’s no denying it: These are challenging times for the United Methodist Church.

What do young people think about the future of the church and their role in shaping it? To get some idea, we reached out to five teens and young adults with connections to the Kentucky Annual Conference.

The five come from different backgrounds and have different beliefs and perspectives, but they agree on one thing: They clearly love the UMC and care deeply about its future and their role in shaping it.

Here’s what they had to say:

Perrin Bailey, 23, formerly of Frankfort, 2017 graduate of the University of Louisville:
Kentucky native Perrin Bailey is spending some time in St. Louis as a substitute teacher in special education before attending seminary. She hopes to be ordained as a deacon in the UMC someday.

Bailey sees a less traditional UMC in 10-15 years as far as its community and social engagement. She loves the traditional liturgical approach to worship but thinks the future could look different.

She hopes for more clarity between different groups in the church. People who are liberal and oriented toward social justice are not engaging in dialogue with more conservative people, she said. “I think that will definitely change the way the church looks in the next decade.”

Bailey, who is openly bisexual, said she is apprehensive ahead of February’s General Conference, where church delegates will debate and vote on how the church handles homosexuality.

She said she is encouraged by the work of the Commission on a Way Forward, a 32-member advisory group that helped to craft a possible compromise to avoid a church split. Her concern is more about how the church will respond after General Conference.

“It’s very difficult,” she said. Still, “I trust the people making the decision, and I trust the process so far.”

Since she graduated from the University of Louisville in 2017, she has taken a step back from the United Methodist world. But she said she recognizes she needs to be plugged into a church and hopes other people will be as well.

Once she becomes a deacon, she wants to focus on interfaith ministry to help Christians be good neighbors to others. “I do have hope that I will be able to do that,” she said.

Alex King, 16, junior at Scott County High School, member of First UMC in Georgetown:
Alexandria “Alex” King believes the UMC is an open-minded institution and points to the open communion table as an example. People need to feel welcomed, she said, and she believes the church does that well.

She also believes the church currently appeals more to older people and could do a better job of reaching younger people, such as by offering more contemporary church services.

As far as social beliefs, she said she’s never felt like she has to agree with others, but she does believe she must respect them — something that “everybody needs, especially if they’re struggling.”

“One hundred percent of people will never agree with something,” she said, but “it’s OK to have different opinions. That doesn’t make someone bad or unworthy.”

She’s very involved in her church, including youth group. She’s tentatively planning on a career in business and also plans to stay active in the UMC.

“I can’t imagine myself not” being involved, she said.

Levi Shinabery, 16, junior at Highlands Latin School in Louisville, member of Centenary UMC in Shelbyville:
Levi Shinabery sees the UMC going through changes, which he said is a good thing because beliefs are strengthened through challenges. Any belief or teaching should be compared to the Christian perspective, using the Bible as evidence, he said.

“I believe if we stick to those teachings, the future should be pretty good for the Methodist Church,” he said.

Shinabery said he hasn’t been closely following the human sexuality debate but again cited the Bible, which he said clearly condemns homosexuality. “If we don’t reference the Bible, then bad things are going to happen with the church’s beliefs,” he said.

Shinabery is involved in the youth group at Centenary, serving as a discussion leader, and also serves as an audio-visual technician for one of the Sunday services. He is planning to study chemical engineering in college.

Tavis Tinsley, 23, formerly of Owensboro, now attending the Interdenominational Theological Center in Atlanta:
Tavis Tinsley sees the UMC becoming increasingly broad and inclusive, active in many countries. One stigma against the current church is that it isn’t very diverse, he said. By “diverse,” he refers to generationally and economically, as well as racially.

“I think we have the chance to become more diverse over time,” said Tinsley, who is African-American.

He said what he most loves about the UMC is its structure. He said he’s an organized person and appreciates that the church is as well. Among other things, he said, the UMC connects people with churches and provides books, workshops and other resources as needed.

Resourcing is important, he said, because when it comes to winning people to Christ, “we can’t be lackadaisical.”

He said he has been following the debate leading up to General Conference in a general way, adding that he is “concerned but not worried” about the future of the church. As for his personal belief, “I’m taking the time to develop my opinion before I take a stance.”

He is focusing on pastoral care and counseling at the Interdenominational Theological Center, a consortium of five primarily African-American seminaries in Atlanta. He wants to become a Christian therapist.

Lynne-Grace Wooden, 16, junior at Paul Lawrence Dunbar High School in Lexington, member of Southern Hills UMC:
Lynne-Grace Wooden said that the church must be inclusive, regardless of gender, nationality and sexual orientation. It’s something the UMC hasn’t always done well, she said. “I see that this is Jesus’s call for us.” If gays can’t fully take part in church, then it’s not total acceptance, she said.

“I think we’ve done a pretty good job in the past, but there’s more that we can do,” she said.

As far as worship format, she believes both contemporary and traditional services need to be part of the UMC’s future. She grew up in a traditional worship setting, but “I love both. I feel the Holy Spirit in both.”

She expressed optimism about the future because she has gone to Annual Conference the past two years as a youth delegate and has met some amazing people there. Her experiences at camps and retreats have also been overwhelmingly positive, and she sees today’s youth as preparing to take the church into the next generation.

Being inclusive and mission-oriented is crucial in the future because there is so much need in the world, Wooden said.

One big advantage of the church is that United Methodists are methodical — as she learned in confirmation classes. Things may change, but the church has methods to help carry it forward, she said. “Our methods have stood for so long, I think they can stand through time.”

Times are changing and there are some difficult transitions ahead, but the church always has people ready to step up and lead, Wooden said.

She is very involved in her church, running a student-led Sunday School class for youth with three close friends that she said usually draws about 10 each Sunday. She comes by her heavy church involvement honestly: Her mother, Joan, is one of the pastors at Southern Hills.

As for her future in the UMC, she said she has felt God calling her. “I would say that there’s something in the future in the church for me. I’m just not sure yet what that means.”