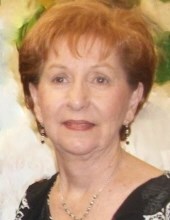 She had made a profession of faith in Christ and was a member of the Greensburg United Methodist Church. She was also a bookkeeper and accountant. She united in marriage to William Dennis "W.D." Strader on January 22, 1955 who preceded her in death on May 8, 1999.

Survivors include a son and two daughters-in-law: Ricky and Beverly Strader of Liberty, and Patti Strader of Greensburg; four grandchildren: Krystal Alexander and her husband, Travis of Munfordville, Jordan Strader (Carissa) of MI, Haley Strader of Greensburg, Celese Cochran (Michael Hays) of Liberty; seven great-grandchildren: Brooklyn, Aryonna, and Patience Alexander, Ayden and Kinsley Strader, Jace Lowe, and Conner Barnett; two brothers and sisters-in-law: Donnie and Stella Thompson of Campbellsville, and Floyd and Paulette Thompson of Tennessee; a special friend: Jimmie Downey of Columbia; and a host of other relatives and friends. Mrs. Strader was also preceded in death by a son: Greg Strader on November 29, 2006; a brother and three sisters: James Thompson, Pauline Hedgespeth, Judy Shuffett, and Opal Miller.