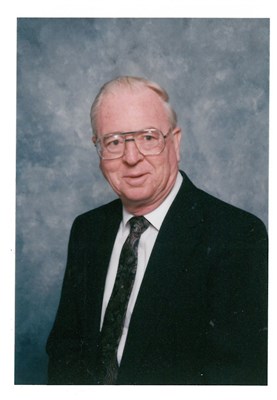 For years and years you spread God’s word and message to the people of Kentucky. From Liberty to Lancaster to Georgetown, Cynthiana, to Ashland, Harlan. All these towns you touched so many lives. You had so many accomplishments in your life. You were not only a pastor you were an author. You wrote a weekly article for numerous newspapers for more than 25 years (An Encouraging Word). You wrote two books, one which is still on bookshelves today (Holy Thoughts from the Holy Land). You traveled with my Aunt Kathryn to many states and countries over the years. When you traveled to the Holy Land it inspired your latest book.

You were such a kind, gentle, easygoing, selfless man. I watched you in amazement as a little boy at church services when I came to spend time with you and my Aunt Kathryn. Over the years you were such an inspiration to me. You were not only my rock, you were a friend and mentor. I watched you take care of my Aunt Kathryn for seven years during her sickness, as she had become immobile and could not take care of herself. How you did it I don’t know.

After your passing what I had already known was confirmed even more, as so many people told me how much you had touched their lives. I miss the trips to church with you and the special dinners we had from time to time afterward. It was truly a special time with a very special person in my life. As much as I miss you, I know that you are in the place you have worked to get to all your life, and you have been reunited with Aunt Kathryn and all the family members we have lost over the years. Thank you for everything. You are missed so much. On behalf of everyone, family and friends, you will be in our hearts forever.

(Rev. Coop received degrees from Burkesville High School, a BA degree and the Regents Medal for Oratory from Eastern Kentucky University, and a BD degree from the Candler School of Theology. In 1953, he was admitted on trial into the Kentucky Annual Conference, then ordained a deacon a year later. In 1955 he became an elder in full connection. He served 42 years as a pastor of small, medium and large churches.)