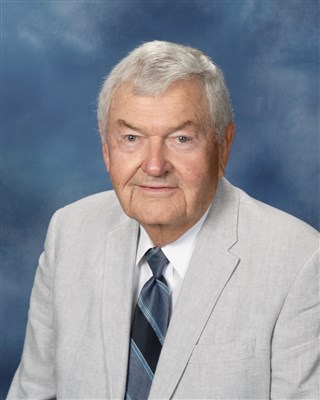 The Rev. Samuel R. Clark, 87, passed away on Oct. 26, 2018, at Wesley Manor Memory Care Center in Louisville, Kentucky.
He was born Nov. 18, 1930, in Lebanon, Kentucky, to Spencer and Edna Clark. They were devoted Methodists and were members of  Lebanon United Methodist Church. The Clark family name is well known in Lebanon and Marion County. Sam’s parents had a lasting influence upon him. Their Christian example and guidance were strong. He spoke of them often.

Sam is survived by his loving wife, Barbara J. Clark; two adult children; Samuel R. Clark Jr. and Melinda Jena Wright; and three brothers, Rev. Roy E. Clark, Marcus Clark and Rev. Joseph Clark. Two of the surviving brothers are UMC elders; both are now retired.
Sam and Barbara were a great “team” in ministry. They were married in Park City UMC, where Sam was pastor. Barbara was a great support and encourager and contributed greatly to his ministry.

Sam graduated from Lebanon High School, Lindsey Wilson College, Kentucky Wesleyan College and Candler School of Theology.
He served the following appointments: Park City, Lindsey Wilson College staff, St. Peter, Brandenburg, Bethany, Chapel Hill, Scottsville, Jeffersontown, district superintendent of the Bowling Green District, and Shelbyville Centenary. In his youth, he was a conference officer in the Methodist Youth Fellowship. Sam was a committed, dedicated, faithful servant of our Lord.
Sam loved to sing and had a beautiful voice. He led the singing in a number of churches during revival services. He and Barbara sang in the chancel choir of  Woodlawn UMC in Panama City Beach, Florida, where they owned a condominium and spent their winters. The people of Woodlawn appreciated them very much.

Sam loved the farm in Marion County. He and Barbara built a beautiful home on their farm and eventually sold it and moved to Louisville.
He loved University of Kentucky basketball and never missed a game on television.

In his retirement years, he continued to be faithful in his church attendance. Many were impressed and inspired by his daily Bible reading, The Upper Room devotional guide, and prayer. The Scriptures were “a lamp unto his feet and a light unto his path.”
His memorial service was held Nov. 3, 2018, at Christ Church United Methodist in Louisville, where he and Barbara were members, with  Rev. George Strunk, Rev. Gary Gibson, Dr. W. Glenn Sowards, and Rev. Fred C. Whitmore officiating.

Sam Clark was a man of immense integrity and will be greatly missed by his family and all who cherish his friendship.