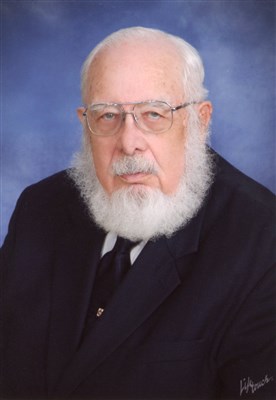 He was born Nov. 23, 1930, in Henderson County, Kentucky. Alfred was a farm boy who grew up behind a mule and a plow, raised in a home without electricity or running water, and yet achieved two degrees (Kentucky Wesleyan College and Candler School of Theology at Emory University) and a multitude of honors for an illustrious career as a true servant of the Lord and community volunteer.
Married to his college sweetheart, Helen Crafton Williams, together they raised three children.  Alfred was preceded in death by his wife; daughter Anniesse and son Harold.  Alfred is survived by daughter Beth Speedy; grandchildren Courtney and Matthew; and great-grandson Hudson.

Alfred and Helen served a multitude of communities throughout Georgia and Kentucky in the Louisville Conference with a special emphasis on rural ministries.  Alfred served at Lake Junaluska, North Carolina, and was especially devoted to Camp Loucon from its very early years in the 1950s until his move to Louisville in 2017.  Together, they influenced so many lives, “practicing what they preached” to the fullest.  Alfred and Helen always warmly welcomed any and all members of the community into the Church as well as opening the doors of the parsonage and lending a hand whenever the need arose.

Alfred served on the Civil Defense, Red Cross, as chief of the Cloverport Fire Department and EMT, and scout leader in numerous communities.  Alfred was always willing to provide assistance in any way he could by clothing, feeding, and providing a home to those in need as well as teaching the basics of life, using Christian principles.  Alfred loved to teach the glory of God through nature, especially to his own children and the campers he ministered to at Loucon.

After living in parsonages throughout their career, upon his retirement, Alfred and Helen purchased their one and only home in Leitchfield, Kentucky.  He continued his pastoral career volunteering as Santa Claus as well as filling in for vacationing pastors at a number of United Methodist churches in western Kentucky, lending a hand wherever he was needed until he moved to Louisville in 2017 to be near his daughter.

Alfred continued his volunteer service at the Episcopal Church Home in Louisville and was recognized in 2018 by the University of Louisville Institute for Sustainable Health and Optimal Aging for his volunteer efforts as a senior citizen in his new community, including one last glorious appearance for all of the ECH families as Santa Claus, two days before his sudden passing.